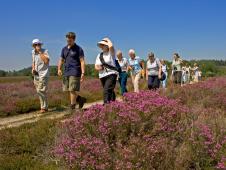 Green space in an urban environment can improve life expectancy and decrease health complaints. Natural green space provides opportunities for walking and other activities and is a cheap, sustainable means of preventing public health problems. Examples from the EU show that accessible green space has the potential to provide a wide range of physical and mental health benefits, increasing our wellbeing, and reducing health care costs.

Obesity caused by physical inactivity is one of the biggest health risks in the EU. Obesity affects over 200 million people in Europe, including three million children and in 99% of cases the overwhelming influence on the increase in obesity is environmental (International Obesity Taskforce 2002). An estimated 40% of the EU population are physically inactive, including 10–20% of children in some countries. Inactivity leads directly to serious conditions, such as heart disease and type II diabetes. In the UK, inactivity costs over €11,700 million a year (Bird 2004). A lack of safe accessible environments in which children can play and adults can walk is a key factor behind these figures.

Nature not only has been shown to help motivate physical activity, but it also affects our psychological welfare (Pretty et al. 2005). Depression and depression-related illness are predicted to become the greatest source of ill-health by 2020 (WHO 2001). A large number of studies illustrate how nature helps recovery from stress and attention fatigue, and that the mental, physical and socio-emotional development of children may benefit from direct contact with nature.

A BirdLife report highlights (through 26 concrete case studies from across Europe) the importance of biodiversity for the health, quality of life and prosperity of all EU citizens (BirdLife 2007). It shows how long term economic development relies on environmental resources and functioning ecosystems, how access to green space improves physical and mental health and how education in the natural environment benefits current and future generations. Two examples follow.

“Health walks” started in south Oxfordshire in 1995, aiming to combine the social and environmental factors that are essential to maintaining levels of physical activity. Their success means there are now more than 350 similar “Walking the Way to Health” schemes, led by over 10,000 trained volunteers in the UK. Walking provides physical activity without needing high fitness levels and carries a low risk of injury. Although the walks are designed to improve health, studies have shown that an opportunity to be in the countryside is the joint main reason why people participate. Sixty-four percent of participants say that “health walks” have changed their transport habits, with 27% saying that they now walk, rather than drive, short distances (Bird 2004).

A Danish study of 1,200 people aged between 18 to 80 found that their most popular activities were those undertaken in green areas near their homes, such as walking or gardening. The study found that nature motivates people to be outside, where they enjoy the landscape and unwind. Over 90% of respondents said that green areas are important for their mood and health, and researchers found that people living closer to green space are less stressed (Skov and Lansdab 2005).

Bird, W. (2004) Natural fit. Sandy, UK: Royal Society for the Protection of Birds.
BirdLife International (2007) Wellbeing through wildlife in the EU. Sandy, UK: Royal Society for the Protection of Birds
International Obesity Taskforce (2002) Obesity in Europe, the case for action. International Obesity TaskForce and the European Association for the Study of Obesity, London.
Pretty, J., Griffin, M., Peacock, J., Hine, R., Sellens, M. and South, N. (2005) A countryside for health and wellbeing: the physical and mental health benefits of green exercise. Colchester, UK: University of Essex.
Skov and Lansdab (2005). The use by the Danes of green areas—health perspective.
WHO (2001) World Health Report. Geneva: World Health Organisation.