Natura 2000 at sea: good progress but more to do 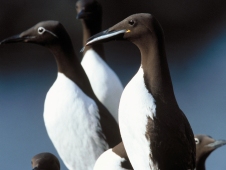 The European legislation protecting wild birds (the Birds Directive) was adopted in 1979, however many countries have been extremely slow at designating protected areas (Natura 2000 sites) for seabirds—particularly for areas at sea. BirdLife's marine Important Bird and Biodiversity Areas are recognised as a 'shadow list' for Natura 2000 site designation, but many of these sites remain unprotected. BirdLife has assessed the progress made within each coastal EU country, in designating Natura 2000 sites for seabirds.

Progress in the designation of marine Special Protection Areas (SPAs) in the EU, based on level of overlap between marine IBAs and SPAs.

The European legislation protecting wild birds (the Birds Directive) was adopted in 1979, however many countries have been extremely slow at designating protected areas for seabirds—particularly for areas at sea. Scientists within the BirdLife Partnership have been studying the ecology of seabirds and using this information to identify the most important sites on land, coast and sea for seabirds—collectively known as marine Important Bird and Biodiversity Areas (mIBAs). Within Europe, mIBAs are recognised as a 'shadow list' of sites for Natura 2000 designation, offering an excellent opportunity to influence the location of protected sites based on rigorous science. Although some countries have embraced the mIBA inventory, providing protection under Natura 2000 as Special Protection for Birds (SPAs), others have lagged behind, leaving important sites for seabirds unprotected.

In 2014, BirdLife carried out an assessment across the 23 coastal countries in Europe, determining the progress made by each country towards protecting seabirds under the Natura 2000 network. The assessment was based on the protection provided to mIBAs, including terrestrial, coastal and marine sites; as well as the total proportion of a country's marine area that is protected for seabirds. These two metrics were used to categorise progress, ranging from 'Very Good' to 'Poor'.

Only three countries, Spain, Germany and Poland achieved a ranking of 'Very Good' for their progress, due to a high proportion of mIBAs being protected and significant areas at sea designated. Spain in particular has shown dramatic improvement recently, with 39 new marine sites designated in 2014, based upon the Spanish mIBA inventory. The new sites, including coastal and offshore areas, mean that 5% of Spain's extensive marine area is protected for seabirds.

The poorest performers were the UK, Ireland, Portugal, Greece, Sweden, Cyprus, Malta and Slovenia, where at sea protection remains extremely low and protected sites were mostly limited to terrestrial and coastal areas. In many cases, such as in Portugal, less than 1% of the total marine area is protected for seabirds. In general, the overlap between mIBAs and Natura 2000 was low, particularly in countries where dedicated seabird tracking projects have identified sites at sea (eg. Greece, Portugal, Malta). These eight countries are the most in need of urgent action to protect sites at sea for seabirds, and designate the existing mIBAs compiled by the BirdLife Partnership. A further 7 countries were rated as 'Mediocre', meaning that 15 out of 23 European coastal countries are lagging behind in protecting seabirds.

Although the European wide assessment indicates individual country progress, it also reveals that further work is needed by nearly all countries in offshore site identification. Even in the high achieving countries such as Germany, where 35% of the marine area is designated for seabirds, the more distant offshore areas are not protected. Countries need to invest further in seabird tracking and offshore surveying to identify sites beyond their territorial waters. In addition, many sites in many countries are still lacking management plans- a vital component to move marine Natura 2000 sites beyond simply being 'paper parks'.

Key message: Protected area networks are vital for conservation, but have many gaps
Case studies