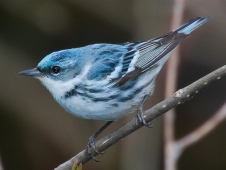 Cerulean Warblers have undergone an 82% decline over the past 40 years. The remaining core habitat overlaps with the Appalachian coal fields, where the practice of mountaintop mining is becoming increasingly common and an increasing threat to the species.

In the US, mountaintop mining occurs primarily in parts of West Virginia, Virginia, Tennessee and Kentucky in a forested region of approximately 4.8 million hectares (U.S. Environmental Protection Agency 2005). The process involves the removal of the top 200–250m of the mountain to mine the coal deposits. It was developed within the past 20 years, and is becoming an increasingly popular method amongst mining companies for the extraction of coal.

Cerulean Warbler Dendroica cerulea abundance and territory density is significantly reduced by mountaintop mining through the loss of core forest habitat on mountain slopes (Weakland and Wood 2005, Wood et al. 2006). It is estimated that between 1992 and 2012, 1.4 million acres of forest will be lost from the Appalachians, with over half due to mountaintop mining (Audubon Society 2006). Continuing habitat loss, along with the historic and recent population declines, lead to the species being uplisted from Least Concern to Vulnerable in 2004 on the IUCN Red List (BirdLife International 2008).

The Cerulean Warbler is not currently listed as threatened by the U.S. Federal Wildlife Service, and is therefore not covered by the Endangered Species Act. This gives the mining companies the freedom to continue mountaintop mining in the Appalachians without fear of legal repercussions, and the slide of the Cerulean Warbler towards extinction continues.

Recommended Citation:
BirdLife International (2008) Mountaintop mining in the Appalachians is causing a decline in Cerulean Warblers. Downloaded from http://www.birdlife.org on 28/05/2022