Most threatened birds have small populations 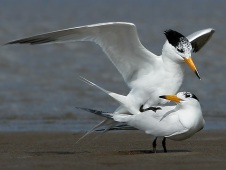 Seventy-one percent (1030 species) of threatened birds have populations of fewer than 10,000 individuals, while 42.1% (614 species) are below 2,500 individuals (see figure). In total, 85 species (5.8% of threatened birds) have tiny populations that possibly number fewer than 50 individuals. For example, there are only 1-49 adult Tahiti Monarchs Pomarea nigra left on Tahiti, French Polynesia, and only 33-47 adult Puerto Rican Amazons Amazona vittata on Puerto Rico. For both species this is largely due to loss of their forest habitat, predation by alien invasive species such as the Black Rat Rattus rattus, interspecific competition for nest sites, and natural disasters such as hurricanes. When faced with such threats, their tiny populations are of great conservation concern and make them a priority species for conservation action.

Additionally, most species with small populations are undergoing a decreasing population trend. Only 430 threatened species (29.5%) have populations that are estimated to exceed 10,000 individuals, of which most are classified as threatened because of their rapidly declining numbers. For example, Rüppell’s Vulture Gyps rueppelli has an estimated population of 30,000 individuals, but has experienced a 97% decline over three generations (Ogada et al. 2016), contributing to its Critically Endangered IUCN Red List classification.

Key message: One in eight of the world's birds faces extinction
Case studies