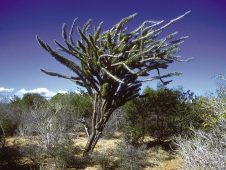 A total of 218 Endemic Bird Areas has been identified across the world, the majority in the tropics and subtropics. There is good congruence between global patterns of bird endemism, as shown by Endemic Bird Areas, and those shown by other biodiversity, including other terrestrial vertebrates, invertebrates and plants for which data are available.

The location of the world’s 218 EBAs

An Endemic Bird Area (EBA) is defined as an area that encompasses the overlapping breeding ranges of two or more restricted-range landbirds, such that the complete ranges of at least two species fall entirely within the boundary of the EBA. Following this simple definition, a total of 218 EBAs has been identified across the world (see map), covering the ranges of 93% of restricted-range birds (2,451 species). The majority of EBAs (77%) are in the tropics and subtropics. There are approximately equal numbers of island EBAs (105) and mainland EBAs (113). Of the island EBAs, 70% are on oceanic islands, 30% on continental-shelf islands, while for the mainland ones, 42% are largely in montane areas, 35% in lowland areas and 24% span both. The predominant natural habitat in most EBAs (c.80%) is forest, especially tropical lowland and montane moist forest. The number of restricted-range landbirds occurring in EBAs varies from two to over 50 (the richest EBAs are the Solomon Islands, the Chocó in Colombia and Ecuador and the Atlantic Forest lowlands in Brazil) (Stattersfield et al. 1998).

There is good congruence between global patterns of bird endemism, as shown by EBAs, and those shown by other biodiversity, including other terrestrial vertebrates, invertebrates and plants for which data are available. Overall, more than 50% of EBAs are significant centres of endemism for at least one of these major groups, although their relative importance for different groups is not always the same. For example, ‘Centres of Plant Diversity’ (CPDs—234 areas with high diversity and/or endemism for plants) (WWF/IUCN 1994, 1994–1995, 1997) and EBAs show good congruence: overall, 70% of CPDs overlap with EBAs, and 60% of EBAs overlap with CPDs. EBAs have also been shown to be excellent indicators of vertebrate and plant diversity patterns in sub-Saharan Africa, due to the common ecological and evolutionary principles on which species’ distributions are based.

Recommended Citation:
BirdLife International (2004) Most Endemic Bird Areas are in the tropics and important for other biodiversity too. Downloaded from http://www.birdlife.org on 18/05/2022