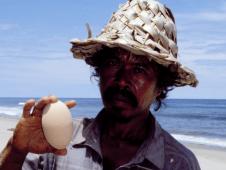 The collection of megapode eggs has been managed with prudence but traditional systems for managing this harvest have broken down in many parts of South-East Asia and the Pacific, such that half of all megapode species are considered threatened.

The collection of megapode eggs from traditional breeding grounds has commonly been managed with prudence owing to the observance of ancestral laws and customs. Local communities regulate the exploitation of communal megapode nests very well, as in the case of the Moluccan Scrubfowl Eulipoa wallacei colony on the island of Haruku, off southern Seram, where a stable population of some 4,000–5,000 pairs persists even though 80% of their eggs are taken (BirdLife International 2001). In Pokilli, in central New Britain, as many as 53,000 Melanesian Scrubfowl Megapodius eremita come to lay their eggs in the geothermally heated soils that extend over some 7 km² around the village, and in the past local tribes fought all-out wars to wrest control of this largest of all megapode nesting grounds, which produces many hundreds of thousands of highly nutritious eggs per year (Collar et al. 2007).

However, traditional systems to manage megapode egg-harvesting have broken down in many parts of South-East Asia and the Pacific, and the consequent unrestricted exploitation has led to abandonment of many nesting grounds and threatens 11 of the 21 megapode species (BirdLife International 2008). For example, of the 142 currently or formerly known nesting grounds of the Endangered Maleo Macrocephalon maleo, which is endemic to Sulawesi, Indonesia, 48 have been abandoned, 51 are severely threatened, 32 are threatened, 7 are of unknown status, and only four are not yet threatened.

Recommended Citation:
BirdLife International (2008) Megapode eggs are an important source of food to many Indo-Pacific communities. Downloaded from http://www.birdlife.org on 16/08/2022