Measuring the environmental impact of farming in Uruguay 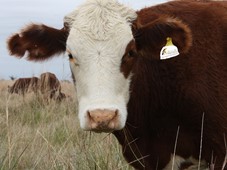 Producers have adopted the Alliance's Saffron-cowled Blackbird logo, which can also be seen on this steer's ear-tag © A. Parera

The Southern Cone Grassland Alliance works to promote sustainable cattle grazing practices across South America to increase both productivity and biodiversity conservation. A recent report by the Alliance uses a Grasslands Conservation Index (GCI) to assess the impact of individual farms across Uruguay on the regional ecosystem with the aim of providing advice and training for farmers.

The grassland biome of southern South America is important for both carbon sequestration and avian diversity, but is under threat due to agricultural intensification (Scurlock and Hall 1998, Di Giacomo and Krapovickas 2005, Overbeck et al. 2007). In Uruguay, the agricultural expansion of the late twentieth century resulted in nearly 4 million hectares of land being transformed for production, the majority of which was natural grasslands. After the second forestry law in the nineties, the afforestation of exotic tree species expanded exponentially, reaching 1.8 million hectares by 2013 (Ferrari et al. 2013). As for crops, one of the major changes was the expansion of soybean and in 2013 it exceeded one million hectares (Ferrari et al. 2013).

With this change in soil cover and increase in grazing, there has been a significant loss of nutrients in the soil, greater homogenization of the landscape, increased risks of water contamination by agrochemicals, and loss of natural habitat and the consequent extinction of species (Viglizzo et al. 2002).

A report published by the Southern Cone Grasslands Alliance assesses the impact that nine cattle ranches in Uruguay are having on the regional grassland ecosystem. The aim of the research is to provide advice and training for farmers so that their practices contribute to biodiversity conservation.

Several studies point to the remarkable sensitivity with which birds and mammals respond to changes introduced by man in agro-ecosystems, ranging from changes on the microhabitat scale to changes on the landscape scale (Ferreira et al. 2014). Habitat loss is the factor that affects the largest number of species in Uruguay, in particular the loss of natural grasslands, swamps or wetlands and native forests (Ferreira et al. 2014).

In the list of priority bird species for conservation defined by the National System of Protected Areas (SNAP) in 2013, there have been 123 priority species selected, of which 46 inhabit grasslands. These species have suffered population declines because of habitat loss and the advancement of the agricultural frontier into natural grasslands. These species play a very significant ecological role, as controllers of agricultural pests and dispersing seeds, essential for the maintenance of natural grassland ecosystem. The loss of ecological diversity in agro-ecosystems accentuates the loss of biodiversity of birds (Benton et al. 2003).

Given all these impacts suffered by the natural grassland and their associated biodiversity, the Southern Cone Grasslands Alliance has developed the Grasslands Conservation Index (GCI) to assess the impact that individual farms are having on the regional ecosystem. The GCI grades each cattle ranch on the relative contribution they make to the conservation of the natural grasslands, while also assessing the productive capacity of the grassland in order to help develop rural economies. The GCI scores the ranch between 0 - 100, with a higher value indicating a greater contribution to regional biodiversity conservation. The index has been endorsed by the Ministries of Agriculture and Environment of six governments within the Southern Cone and received support from the Inter‐American Development Bank.

Aves Uruguay has applied the GCI to nine farms in Sierras de Rocha, eastern Uruguay, where the main impacts on natural grasslands are soybean production, afforestation with fast growing alien species like pine and eucalyptus and overgrazing due to poor livestock management. They found that the farms’ index score varied in the range of 54 to 80, with 67 being the average. Aves Uruguay concluded that the farms’ natural grasslands were generally well preserved and the GCI enabled them to identify the main factors that negatively affected score were the coverage of exotic species, percentage of natural grassland, amount of forage species and coverage of vegetation.

With this knowledge, Aves Uruguay has produced management guidelines for each individual farm to improve regional biodiversity conservation. The study also showed that by linear regression, it could be concluded that there is a positive and statistically significant relationship between GCI and wealth of birds, so a well preserved natural grassland accommodates a wider variety of species.

Recommended Citation:
BirdLife International (2016) Measuring the environmental impact of farming in Uruguay . Downloaded from http://www.birdlife.org on 04/12/2022