Many threatened birds are restricted to small islands 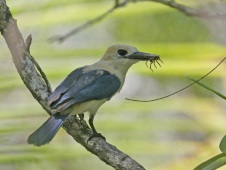 A disproportionately high number of threatened birds occur on islands, particularly oceanic islands far from land. Of threatened birds with available 2016 IUCN Red List data, almost half (47%) exclusively inhabit continental or oceanic islands. This is not surprising because island species typically evolved in isolation and are maladapted to deal with recently emerging anthropogenic (human driven) threats, such as invasive species.

Number of threatened birds on continents and islands

Most of the world’s bird species are found on the continents; only 10% are restricted to islands. However, islands have disproportionately high numbers of threatened species: almost equal numbers of threatened birds are found on continents (617 species, 53.1%), and islands (546 species, 46.9%), with few (23 species, 1.6%) shared between them. Oceanic islands are more important for threatened birds, supporting 391 species, than islands located on continental shelves close to mainland, which support just 155. Some small islands harbour exceptionally high numbers of threatened birds, for example there are 16 on Mauritius and 20 on the Northern Mariana Islands (to USA). The Pacific island of Nauru—one of the world’s smallest states, with an area of just 18 km2 —supports nine threatened birds, one of which (Nauru Reed-warbler Acrocephalus rehsei) is found nowhere else (BirdLife International 2008). These patterns are not unexpected; species on oceanic islands are often particularly susceptible to anthropogenic changes, especially the impacts of introduced predators such as the Black Rat Rattus rattus, due to the fact that they have evolved in isolation for many thousands of years.

Island species are also more vulnerable than continental species to marine natural disasters, such as hurricanes, due to the usually low-lying land and lack of wind or rain buffers. The Tuamotu Kingfisher Todiramphus gambieri, pictured above, is endemic to Niau Island, French Polynesia, and a perfect example of oceanic island species’ struggles. It is Critically Endangered with only 135 remaining individuals, a number that is currently decreasing. Predominant causes for this small population are predation by feral cats Felis catus and loss of suitable nesting sites due to hurricanes (Gouni et al. 2006).

Recommended Citation:
BirdLife International (2017) Many threatened birds are restricted to small islands. Downloaded from http://www.birdlife.org on 12/08/2022