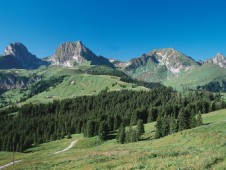 Nearly 40% of the world's birds are so highly specialised and adapted to a particular subregional biome—such as Mediterranean shrubland in Africa or Australia—that they cannot survive outside these areas.

The terrestrial biomes of the world

At the global scale, the natural environment of the world's landmasses can be divided into a small number of broad ecological units, called biomes, characterised mainly by their vegetation structure—for example forests, shrublands, grasslands and deserts. The distribution of these biomes across continents is controlled largely by abiotic conditions of geography, climate, latitude and topography. Thus, for example, the Mediterranean shrubland biome always occurs at the western edge of continents, in subtropical latitudes, since these geographical conditions tend to generate the hot, dry summer and cool, wet winter of the 'Mediterranean' climate. The sum of these physical conditions (with attendant summer droughts, frequent fires and winter floods) tend to constrain and shape the vegetation structure towards a universal 'Mediterranean shrubland' appearance, in places as diverse as Chile, South Africa, south-west Australia, California and south-west Eurasia/north-west Africa (see map).

The plants, animals and soil organism species that comprise a particular biome in a particular geographically discrete region or subregion—such as Mediterranean shrubland in Africa or Australia—all share approximately the same abiotic conditions (e.g. summer drought and fire, winter flooding, etc. in this case) and so these species have evolved, over time, a set of shared adaptations to their abiotic environment and to each other (through competition, predation, parasitism and symbiosis). Indeed, many species are so specialised for life in 'their' biome that they cannot survive outside it (see table). These biome-restricted species are more sensitive or vulnerable to damage and degradation of their biome, than are more widespread species, and are thus an important focus of attention for conservation.

The number of biome-restricted species per region

Birds illustrate this principle well. Overall, nearly 40% of the world's bird species are biome-restricted and, by inference, highly specialised and adapted to 'their' biome. Looking at the tropical rainforest biome, the Guinea–Congo rainforests of western and central Africa support some 274 species of bird that are found nowhere else, while Amazonia supports 93 such species and the Sundaic lowlands 170 such species. The avifaunas of these three rainforest areas actually have almost no shared bird species, and so the conservation of Amazonian bird species contributes little towards conserving Guinea–Congo bird species, and vice versa—the different regional manifestations of a biome tend to be irreplaceable and mutually exclusive units in conservation terms, since they have evolved separately and independently through much of their history. To conserve the full diversity of genes, species and ecosystems of a biome, such as tropical rainforest, a prime consideration is therefore to spread conservation action across the biome's global geographic range, in a representative way.

A total of 956 bird species are confined to any one of the biomes in Africa, representing 44% of all bird species regularly occurring in Africa (see map and table). Other regions with a relatively high proportion of their avifauna as biome-restricted are South America and Asia, both large and diverse land-masses with extensive tropical areas. Smaller and more uniform land-masses have relatively fewer biomes and biome-restricted species. In general, relatively fewer bird species are restricted to biomes at higher latitudes, in smaller biomes, and in less structurally complex vegetation types.

Recommended Citation:
BirdLife International (2008) Many bird species are confined to just one of the world's terrestrial biomes. Downloaded from http://www.birdlife.org on 04/12/2022