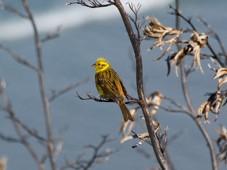 Persistence of populations outside of protected areas will be vital in facilitating climate-induced range expansion. Agri-environment schemes will increase landscape permeability, as has been demonstrated by increasing farmland birds numbers with uncropped agricultural land in the UK. 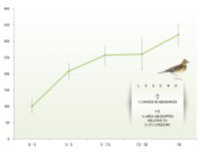 To enable species to ‘track’ climatic changes, the landscape surrounding suitable habitat must be permeable to their movements. Effective management across whole landscapes is therefore key, and can be typically achieved through projects involving a large number of stakeholders, such as farmers taking part in agri-environment schemes.

An experimental approach has been used in the UK to demonstrate the importance of matrix management for farmland bird populations (Henderson et al. 2012). Seven treatments across 28 farmland sites consisted of varying spatial configurations and proportions of uncropped land to determine the effect of different management approaches for the abundance of species with different population trajectories and habitat dependencies.

Farms containing 3-5% of uncropped land supported much lower bird densities than farms with more than 10% uncropped land, with this pattern being strongest on conventional farms and for declining, farmland dependent and biodiversity action plan species such as the Eurasian Skylark Alauda arvensis, Eurasian Linnet Carduelis cannabina and Yellowhammer Emberiza citrinella. Significant differences in bird densities were not seen for bird species less reliant on farmland or for those that had stable or increasing population trends.

The spatial arrangement of the uncropped land was only important for two species, the skylark and linnet. For the skylark, strips rather than blocks were important in increasing numbers, suggesting a high edge ratio was beneficial, whereas linnet showed the opposite pattern, preferring blocks over strips of habitat.

Overall, increasing proportions of land left uncultivated will help farmland birds thrive in a heavily managed agricultural landscape. This will become increasingly important as species are forced to move across landscapes in response to changing climatic conditions.

Recommended Citation:
BirdLife International (2015) Managing the matrix of suitable habitat between key sites will aid movement of species. Downloaded from http://www.birdlife.org on 06/02/2023