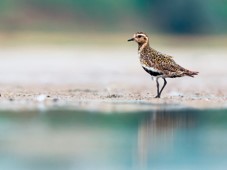 Peatlands in the UK uplands are sensitive to summer drought, which reduces cranefly (Tipulidae) abundance. This is a key prey for Eurasian Golden Plovers Pluvialis apricaria, which are projected to decline by 30% in the South Pennines by 2050-2080. In drained peatlands, the simple act of blocking drainage ditches increases soil moisture and cranefly abundance, with likely benefits for the plover population, and for ecosystem services including carbon storage and water quality. 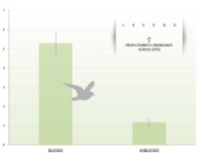 Practical management strategies will become increasingly important in enabling some species to adapt to a changing climate. This is well recognised by the RSPB (BirdLife in the UK), who is incorporating climate change threats into management plans across its network of 213 nature reserves. Each reserves management objectives spans twenty five years, and is reviewed every five years, to ensure actions are achievable in the long-term vision (Ausden 2014).

Management is especially relevant in peatland habitats, as climate change is expected to drastically affect the extent and distribution of this ecosystem in the UK (Gallego-Sala et al. 2010). Increased drying of peatlands is projected to reduce the abundance of keystone prey species such as cranefly Tipulidae, with knock-on effects for a range of bird populations including the Eurasian Golden Plover Pluvialis apricaria (Pearce-Higgins et al. 2010, Carroll et al. 2014).

Models suggest that future changes in peatland hydrology are likely to result in reduced soil moisture and may drive cranefly population declines of between 55.9 - 81.2% by 2080. Projections for the South Penines suggest knock-on effects for golden plover with predicted declines of 30% by 2050-2080 (Carroll et al. 2014). These declines may be avoided by simple management approaches such as those that increase prey abundance (Pearce-Higgins 2010) such as blocking drainage ditches (Carroll et al. 2011).

Using a large scale experimental approach, moisture levels and cranefly abundance was compared between paired river sub catchments, with each river of the pair containing blocked ditches and the other unblocked (Carroll et al. 2011).

Cranefly abundance increased with soil moisture, and soil moisture was significantly higher in blocked compared to unblocked ditches, but this reached significance in just one of the two years (Carroll et al. 2011). Together, these results suggest that projected cranefly and bird declines may be reduced by the simple act of blocking ditches in drained peatland habitat. This dain blocking approach is now being utilised at some RSPB sites, demonstrating how research can effectively inform conservation management plans to help species adapt to a changing climate (Ausden 2014).