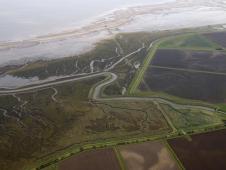 In the Humber Estuary, UK , the managed realignment of coastal wetlands is protecting local communities from sea level rise and safeguarding an area of international importance to migrating waterbirds.

Coastal wetlands can reduce the impacts of waves, storms, and sea-level rise by accumulating silt, reducing erosion and absorbing wave power. Protecting and restoring ‘green infrastructure’ through managed realignment of coastal wetlands can be a cost-effective and affordable long-term strategy to mitigate climate change impacts. In comparison, hard infrastructures, including seawalls and levees (often manufactured from materials with high carbon footprints), can be more expensive to build and maintain, and can impact important natural processes up and down stream.

Climate change predictions suggest the sea level around the Humber Estuary will rise by about a third of a metre over the next 50 years. Bigger, more frequent storms are also expected. The existing sea defences will struggle to cope, leading to increased risk of flooding. With increased flooding, vital intertidal habitats, already being squeezed against traditional flood defences, will continue to disappear.

The vast majority of the Humber Estuary is designated as a Ramsar site, as well as a Special Protection Area and Special Area of Conservation. Every winter, over 175,000 waterbirds rely on the estuary for vital re-fuelling (RSPB et al. 2009a). The low-lying land around the Humber Estuary is home to about 400,000 people. The area also contains major industries, including power stations, refineries and the country’s largest port complex (over £7 billion in assets). Of the remaining land, over 80% is farmed.

The Coastal Futures-Humber Community Project was set up to support communities experiencing coastal change and sea-level rise along the north bank of the Humber Estuary. The initiative was developed in partnership by the RSPB (BirdLife in the UK), the Environment Agency and Natural England. The project was designed to engage with local communities about sea-level rise, the effects it may have on the Humber Estuary, and proposals to manage it—including managed realignment, the process of moving the line of flood defences inland and then breaching the old defence allowing the sea to naturally create more habitat. This technique means that costly flood walls and embankments do not have to be built as high to provide the same level of protection to communities, and maintains the feeding grounds for important populations of waterbirds. The project has helped to identify local issues and allowed community concerns and aspirations to be taken into account in the design of schemes (RSPB et al. 2009b).

Recommended Citation:
BirdLife International (2009) Managed realignment for coastal wetlands in the UK is helping people and nature adapt. Downloaded from http://www.birdlife.org on 22/01/2022