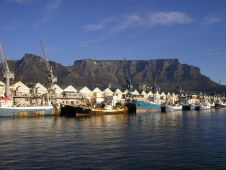 Some of the world’s richest longline fishing grounds coincide with key foraging areas for seabird species. Albatrosses and petrels, along with other seabirds, come into conflict with fisheries in these areas when they forage behind vessels for bait and fish waste, where they can become caught on hooks and drown. Between 160,000 and 320,000 seabirds are thought to be killed as bycatch in longline fisheries each year, including up to 100,000 albatrosses. 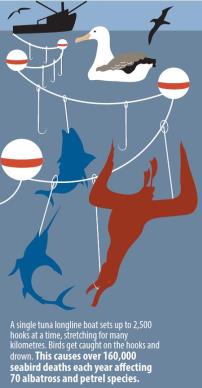 Highly productive areas of the global oceans, such as upwellings and fronts, are of key importance to the world’s commercial longline fisheries. They are also the rich foraging grounds for seabirds (BirdLife 2004).

The incidental mortality of seabirds on longlines was first reported from bird band recoveries in the early 1980s (Morant et al. 1983), resulting from birds being caught and drowned on hooks while trying to snatch bait as the lines are set (Brothers 1991). However, quantifying the scale of the problem is difficult due to the diverse and remote nature of many of the world’s fisheries, the lack of systematic reporting, and the nature of seabird bycatch rates themselves, which can be highly variable (Small et al. 2010). Nevertheless, several reviews have concluded that recent and/or current reported levels of seabird bycatch are demographically unsustainable for the populations involved (Tuck et al. 2001, Barbraud et al. 2009, Rivalan et al. 2010).

(b) Longlining and Cory’s Shearwater

The data available indicate that the vast majority of birds caught in longline fisheries are from the albatross (Diomedeidae), petrel and shearwater (Procellariidae) families, along with some species of gulls and terns (Laridae), gannets and boobies (Sulidae) and cormorants (Phalacrocoracidae). Northern Fulmar Fulmarus glacialis, Great Shearwater Puffinus gravis and White-chinned Petrel Procellaria aequinoctialis are among those caught in the highest numbers, notably in the Spanish (Gran Sol), Nordic, Russian and Namibian demersal fisheries. For fleets operating south of 20° S and in the North Pacific, albatrosses and Procellaria petrels form a larger proportion of the bycatch. While these species may be being caught in lower numbers, the impact on their populations may be greater.

Catching non-target species, like seabirds, results in time lost through removing dead birds from hooks/nets, and fish catches foregone due to bait loss; these are detrimental to fishing activities and their economic efficiency. There is therefore, at least potentially, a common interest from conservation and fishery management perspectives alike in addressing this problem.

Dunn, E. and Steel, C. (2001) The impact of longline fishing on seabirds in the northeast Atlantic: recommendations for reducing mortality. NOF Rapportserie Rep. No. 5, The Royal Society for the Protection of Birds (RSPB), Sandy.

Small, C., Phillips, R. A. and Waugh S. (2010) Ecological Risk Assessments for the effects of fishing: considerations for using ERAs to assess risks to albatrosses and petrels. Paper submitted to the Agreement on the Conservation of Albatrosses and Petrels Fifth Meeting of Advisory Committee. Mar del Plata, Argentina, 13 – 17 April 2010.