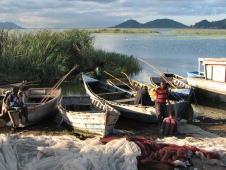 An outright ban is not always the most effective or desirable mechanism for dealing with unsustainable levels of hunting. For example, at Lake Chilwa Important Bird Area (IBA) in Malawi—where wildfowl hunting is an important part of local livelihoods—newly established hunting clubs have successfully implemented measures to control hunting. They have also created a framework of fines that are enforced locally and contribute to community projects. This system of self-regulation is working well and, crucially, is respected by the local community.

Lake Chilwa Important Bird Area (IBA), a shallow lake of about 700 km² bordered by swamps and seasonally flooded grassland, is very rich in fish and supports the livelihoods of about 60,000 people. It meets IBA criteria mainly because of its large congregations of waterfowl. Hunting these birds has long been part of local livelihoods, but large-scale commercial exploitation started in 1996, when the lake dried up and the fishery collapsed. This ability to shift between resources is an important dimension of the resilience of people dependent on natural resources and living in an uncertain environment. But a survey in 1998/99 estimated that over a million waterfowl had been taken following the drying of the lake, a level that appeared unsustainable.

The response of BirdLife Partner the Wildlife and Environmental Society of Malawi (WESM) was not, as might have been expected, to seek a ban on bird hunting, but to find a way to give communities the responsibility and capacity to manage their resource sustainably. A revision of Malawi’s Wildlife Act allows Community Conserved Areas to be established. Under the management of WESM’s Zomba branch, 20 hunting clubs have been created around the lake, with representatives elected to an umbrella body. WESM worked with the clubs and local government to reach an agreement on measures such as a closed season, no-hunting zones, and licensing and bag-limits. These have been written into a by-law, with a framework of fines and measures for dealing with infractions. Importantly, the whole process operates at the local level—offenders are dealt with by traditional chiefs, and fines contribute to community projects like repairing bore-holes and improving school buildings.

So far, the system is working well, and the regulations seem to be respected. The hunting clubs are now looking at ways of diversifying their livelihoods. They are earning extra income by guiding tourists and, with WESM’s help, have developed a tourism business plan. The hunters also carry out bird censuses four times a year, in January, April, July and October.

Recommended Citation:
BirdLife International (2011) Local self-regulation can be more effective at ensuring sustainable resource use than outright ban. Downloaded from http://www.birdlife.org on 29/01/2023