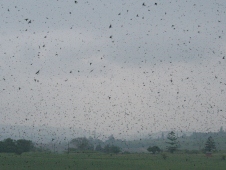 When a roost used by up to three million Barn Swallows Hirundo rustica was threatened by an airport development, BirdLife South Africa found an effective local partner in the Lake Victoria Conservancy. Long before the site was declared an IBA, the group had been acting as custodians of the swallow roost. Their knowledge and campaigning skills ensured that protection of the roost became a high priority for the airport’s operators.

At the height of the ‘swallow season’ up to three million Barn Swallows Hirundo rustica can be seen swirling over the La Mercy/Mount Moreland IBA in the Lake Victoria wetland, before diving into the reedbeds to roost. Mount Moreland is a small settlement 34 kilometres north of Durban, on South Africa’s east coast.

In 2006, Mount Moreland was declared an Important Bird Area (IBA) because the roost hosts over 1% of the world’s migratory Barn Swallows. At times, numbers may be higher than three million, as Mount Moreland is also an important stopover roost for Barn Swallows on their way to more southerly destinations. The Lake Victoria Conservancy, a group of environmentally-minded Mount Moreland residents, has acted as the local custodians for the Barn Swallows and their wetland roost since 1995. To highlight the plight of the swallows and their habitat in the face of the development of the King Shaka International Airport (then known as La Mercy Airport), the Conservancy created a public viewing site overlooking the wetland roost in 2006.

Together with BirdLife South Africa and BirdLife Port Natal, the local club whose members have been engaged with the site for at least a decade, the Conservancy’s members were concerned that the benefits to the local and national economy from the airport development would tip the balance away from protecting the swallows. They also feared that aircraft safety concerns would lead to the clearance of the reedbed, removing the roosting site. The swallows roost here in such numbers because of the lack of other suitable roosting areas around KwaZulu-Natal. The site is an island in a sea of sugar cane plantations.

The Lake Victoria Conservancy had consistent input into the four year-long Environmental Impact Assessment (EIA) for the airport. The runway is only 2.6 kilometres north of the roost, and the flight path skims across the lower end of the roosting grounds. The main threat identified was from planes coming in low in the evenings, at the same time as the swallows return to the roost. As a result of the EIA process and representations made by the Lake Victoria Conservancy and Birdlife South Africa, various management schemes have been put in place to protect the swallows. These include a specially modified radar that gives early warning should any flocks of swallows move into the flight path at the same time as a plane is coming in. The planes are diverted until the flocks have settled. In addition, the airport’s operator has a legal obligation to maintain the roost for the benefit of the swallows. Substantial increase in water run-off from the tarmac and roofing during storm events is anticipated, and the developer has adjusted drainage, built attenuation dams to prevent damage to the wetlands and the roost, and put in monitoring systems to detect spills of aviation fuel, chemicals and sewage.