Lead ammunition continues to build up in the environment, poisoning birds 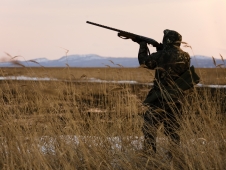 Toxic lead from ammunition is continually deposited on hunting grounds and is found in the remains of hunter-killed animals. This lead is ingested by, and subsequently poisons, millions of waterfowl, terrestrial gamebirds and scavenging and predatory raptors every year.

Thousands of tonnes of lead shotgun pellets are fired over terrestrial and wetland hunting grounds worldwide every year. This lead shot is highly toxic, slow to break down and hard to remove, so can remain in the environment to poison wildlife for many decades. Waterfowl and terrestrial birds mistake lead pellets for food, or for the grit that they take in to aid digestion. Up to 40% of all waterbirds in Europe and North Africa ingest one or more lead pellets during a single hunting season, a quantity that can easily poison and kill a bird or increase its susceptibility to predation, starvation and infection. Lead poisoning is responsible for the deaths of many hundreds of thousands of waterbirds every year (Beintema 2001, Fisher et al. 2006).

At least 59 terrestrial bird species are known to have been poisoned by ingesting spent ammunition, nine of which are classified as globally threatened or near-threatened on the 2008 IUCN Red List (Beintema 2001, Fisher et al. 2006, BirdLife International 2008). Scavenging and predatory birds are exposed to lead in dead game or in offal piles left behind by hunters. Lead shot ingestion accounts for up to 15% of recorded post-fledging mortality in Bald Eagle Haliaeetus leucocephalus in North America (Beintema 2001), and the poisoning of the Critically Endangered California Condor Gymnogyps californianus by lead bullet fragments is seriously jeopardising its re-establishment in the wild (Snyder and Snyer 2000, Cade 2007). The globally threatened Spanish Imperial Eagle Aquila adalberti is also exposed to lead ingested by and embedded in the bodies of Greylag Geese Anser anser, its main winter prey, a species that is heavily hunted on migration between northern Europe and southern Spain (Pain et al. 2005).

Lead poisoning is a threat to humans as well as birds, especially through the consumption of game from hunting areas. Approximately 15% of waterbirds of species commonly eaten by people have lead levels in their blood well above those accepted for human consumption (Beintema 2001).

The African-Eurasian Migratory Waterbird Agreement (AEWA) and other international treaties have set targets to phase out the use of lead shot over wetlands, but actions are slow to occur and there is still a long way to go before the problem is resolved. Prohibiting the use of lead ammunition, particularly over wetlands, and encouraging the sale and use of non-toxic alternatives (which have been proven to be as effective as lead) are recognised ways of lowering the amount of lead pollution in the environment, albeit slowly (Beintema 2001).

Recommended Citation:
BirdLife International (2008) Lead ammunition continues to build up in the environment, poisoning birds . Downloaded from http://www.birdlife.org on 20/01/2022