Large dams threaten one of Africa's most important wetland ecosystems 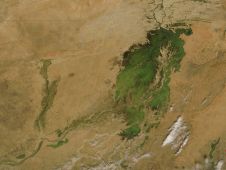 At the centre of land-locked Mali is a wetland of global importance—the Inner Niger Delta. During the wet-season, floodwaters ‘pulse’ through the region’s rivers, at their height inundating more than 25,000 km2. This immense wetland is vitally important, not just for the tens of thousands of waterbirds it supports, but also for the region’s people who make their livelihoods from the floodplain. Unfortunately, the ecosystem is at risk from a number of large dams and by the unsustainable extraction of water for irrigation.

The Inner Niger Delta is located within the semi-arid Sahel savanna in central Mali. The area is a floodplain comprising permanent lakes and vast seasonally-flooded plains. The extent of wet-season flooding is determined by the inflow of water from the Niger and Bani Rivers. This, in turn, is governed by the volume of rainfall several hundred kilometres to the south. From July onwards, water levels rise rapidly, typically swelling by four metres in just 100 days. The floodwaters ‘pulse’ through the delta from the southwest. By the time they reach the north-eastern plains in November the waters will have already subsided in the south. In some years, the water level can peak a full six metres above its dry-season height. In extremely dry years, however, the floodwaters barely reach three metres. The area under water at any one time can exceed 25,000 km2; however, in years of extreme drought, such as occurred in 1984, less than 5,500 km2 can be flooded (Zwarts et al. 2009).

Within the Inner Niger Delta Ramsar site (Wetlands of International Importance) a number of Important Bird Areas (IBAs) have been identified. Collectively, they support huge numbers of waterbirds—both resident species and migrants from across Eurasia, who time their arrival with the onset of the wet-season. The number of waterbirds that the delta can support is directly related to the extent of flooding during this period. In good years, peak counts can include 900,000 Garganey Anas querquedula, 300,000 Northern Pintail Anas acuta, 315,000 Cattle Egret Bubulcus ibis, 50,000 Purple Heron Ardea purpurea, 183,000 Squacco Heron Ardeola ralloides, 25,000 Glossy Ibis Plegadis falcinellus, 9,000 Common Gull-billed Tern Gelochelidon nilotica and 3,500 Caspian Tern S. caspia (Zwarts et al. 2009).

The extent of flooding is also critical to local communities. The region is inhabited by more than a million people, many of whom rely on the floodplain for their livelihoods. The delta provides water for crop irrigation, verdant grazing land for livestock and is a major source of fish, with 60,000–120,000 tonnes landed annually (Zwarts and Diallo 2005).

Unfortunately, the river-basin ecosystem is at risk from external threats. Since the middle of the 20th century, several dams have been constructed upstream of the delta. The largest of these, the Selingue dam on the Niger River, became operational in 1982. This dam alone withholds 2 km3 of water from the delta and has reduced the extent of flooding by 600 km2 (5%). Additional dams have been proposed, including one at Djenné on the Bani River. Should these be built, it is calculated that the total loss of floodplain would rise to about 15–20%, or 2,500–3,000 km2. A further 2.5% of floodplain has also been lost through the excessive extraction of water for large irrigation schemes (Zwarts and Grigoras 2005).

Unless the construction of further dams is reconsidered, and the management of upstream water reservoirs and irrigation regimes is altered, there is likely to be a permanent reduction in the extent of the Inner Niger Delta floodplain resulting in sizable losses of waterbirds.