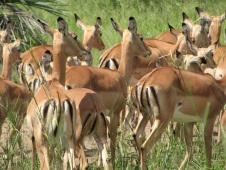 Effective Protected Area conservation can be hampered by poor relationships with neighbouring communities. At the Liwonde National Park in Malawi, for example, the denial of access to natural resources had caused antipathy towards the park and high levels of illegal activities, such as poaching. To address this, park authorities, supported by the BirdLife Partner, have developed a benefit-sharing arrangement which includes local villagers in the park’s management.

Liwonde National Park is a system of Rift Valley flood-plain habitats and associated woodlands in Malawi. It protects the catchment of the upper Shire River and regionally important game populations, including African Elephant Loxodonta africana, Lichtenstein’s Hartebeest Alcelaphus lichtensteini and Sable Antelope Hippotragus niger. The park is designated as an Important Bird Area (IBA) and is home to over 380 bird species, including the Near Threatened Lilian’s Lovebird Agapornis lilianae.

The park’s creation can be attributed to the initiative of local people. Chief Liwonde was largely responsible for initiating the protection of the area. He was concerned with the declining wildlife in the area, which led to the declaration of a controlled area in 1962, followed by the gazettement of the park in 1973. Although the park quickly became one of Malawi’s most popular tourist venues, the impact on local people’s access to resources was not initially considered. The Department of National Parks and Wildlife will allow the occasional collection of fuelwood for use at funerals, and grass and bamboo for thatching, but little else can be removed. Denied access to traditional natural resources local people had become ill-disposed towards the park, with no incentive to support conservation efforts illegal activities such as poacher were rife.

In the year 2000, recognising that the system was not working, Malawi’s Department of National Parks and Wildlife, supported by BirdLife Partner the Wildlife and Environmental Society of Malawi (WESM), revised the wildlife policy and accompanying act to embrace collaborative management as one of the strategies for management and utilisation of wildlife resources in Malawi. Collaborative management involves the sharing of accountability and decision-making, as well as the costs and benefits, between all interested parties. WESM supported the formation of the Upper Shire Association for the Conservation of Liwonde National Park (USACO), representing 31 villages bordering the park. The villages formed Natural Resource Committees, which elected representatives to USACO. Because of the dense settlement around the park, sustainable resource extraction from the park wasn’t viable. Instead, guidelines have been drawn up for sharing the income from gate fees and the park’s two lodges with the community, through a benefit-sharing scheme initiated by the government and supported by WESM. Together with WESM, the Parks Department is providing financial and technical support for income generating activities, such as mushroom growing, beekeeping, conservation farming and guinea fowl farming, as well as services like boreholes to improve water supply.

Recommended Citation:
BirdLife International (2011) Involving local communities in the management of Liwonde National Park in Malawi . Downloaded from http://www.birdlife.org on 07/07/2022