Involving local communities in the assessment and monitoring of biodiversity 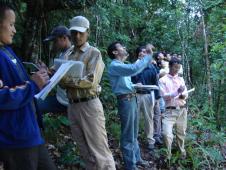 In Nepal, conservationists are training forest-users in biodiversity monitoring techniques that have traditionally been the preserve of expert scientists. This approach not only harnesses indigenous knowledge but also helps build and sustain conservation capacity within local communities.

Biodiversity monitoring is typically a specialist task carried out by scientists often foreign to the landscape in which they are working. As a consequence, the activity can be both costly and perceived as exclusive. There is considerable potential, however, for biodiversity monitoring by local, non-scientific stakeholders. Such an approach can empower communities by building local conservation capacity and linking scientific information more directly to resource-users needs. Participatory Assessment, Monitoring and Evaluation of Biodiversity (PAMEB) does just this by giving the control of biodiversity monitoring to the local communities. It harnesses traditional sources of knowledge and helps engender a conservation ethos and sense of environmental stewardship.

The community-run forests of Nepal provide an ideal setting in which to trial participatory approaches to biodiversity monitoring. Much of Nepal’s forested land is designated as community forest—owned by the government, but managed by local people. Collectively, more than 14,000 local forest associations—known as Community Forest User Groups (CFUGs)—manage roughly 1.2 million ha of forest (Acharya and Gentle 2006). Community forestry in Nepal is widely seen as a successful model for community-based forest management, capable of delivering both forest protection and livelihood benefits (Timsina 2003, Yadav et al. 2003). Of the 27 Important Bird Areas (IBAs) in Nepal, 12 are managed predominantly as community forests.

The PAMEB concept is well suited to CFUGs, which require biodiversity information to guide management decisions and measure the resultant success. The collection of comparable data from across the network of Nepalese CFUGs also allows biodiversity trends to be assessed nationwide. To this end, a pilot scheme was developed by Bird Conservation Nepal (BCN; BirdLife in Nepal), with technical support provided by the Royal Society for the Protection of Birds (RSPB; BirdLife in the UK) and the Federation of Community Forests Users, Nepal (FECOFUN) (Widman et al. 2003).

The scheme was trialed at a number of community forests in the Terai, Churia and Midhills regions of Nepal. A simple, standardised methodology for data collection, based on readily assessed indicators of ecosystem health, was devised that could be incorporated into existing forest inventory practices and easily pooled to generate nationwide data on biodiversity trends. Birds are an excellent indicator taxa. For example, species such as Great Hornbill Buceros bicornis and Sultan Tit Melanochlora sultanea are indicative of high forest quality, whilst species such as Oriental Pied Hornbill Anthracoceros albirostris and Hill Myna Gracula religiosa favour regenerating forest. Species that prefer degraded forest condition and forest edge include Red Junglefowl Gallus gallus and Indian Roller Coracias benghalensis.

The project has successfully demonstrated that highly reliable forest assessments can be effectively implemented by local resource users. It is hoped that this scheme will become a model for effective participatory biodiversity assessment that will guide similar initiatives elsewhere in the world.

Recommended Citation:
BirdLife International (2010) Involving local communities in the assessment and monitoring of biodiversity. Downloaded from http://www.birdlife.org on 31/01/2023