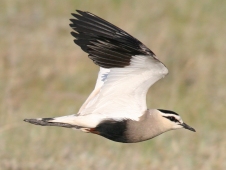 A satellite-tracking project carried out by scientists from the RSPB (BirdLife in the UK) and the Association for the Conservation of Biodiversity of Kazakhstan (ACBK) has revealed important insights into the migration of the Sociable Lapwing, showing that flocks from Kazakhstan migrate to Sudan via staging areas in Syria and Turkey. Research in Kazakhstan indicates that factors on the breeding grounds do not appear to be limiting the population size. Instead, threats on migration and in wintering areas, such as hunting, may be more important. These discoveries provide fresh hope for one of Eurasia’s rarest birds.

Map showing routes taken by two Sociable Lapwings fitted with satellite transmitters from their breeding grounds in Kazakhstan, via staging areas in Syria to wintering grounds in Sudan 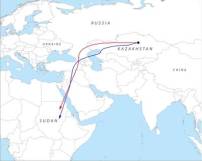 Graphic reproduced with permission of RSPB

The Critically Endangered Sociable Lapwing Vanellus gregarius breeds on the grassland steppes of northern and central Kazakhstan and south-central Russia. It disperses through central Asia and the Middle East to wintering areas in Israel, Eritrea, Sudan and north-west India. The species underwent a precipitous decline of over 90% during the latter half of the 20th century. At one point the global population was thought to number no more than 1000 pairs (Koshkin et al. 2010). Although the reasons for this decline were unclear, researchers suspected that breeding success was being compromised through predation and the trampling of nests by domestic livestock. However, recent fieldwork in Kazakhstan, Turkey and Syria has provided important information suggesting that the population may be substantially larger than previously thought, and that threats on migration and in wintering areas may be more important than those on the breeding grounds.

In March 2007, an expedition team in northern Syria discovered 1,200 birds in one day, with over 1,500 recorded during the trip. This exceptional discovery was followed within days by reports of 1,017 birds at the Ceylanpinar IBA, approximately 25 km away in Turkey (Anon. 2007). Later that year, individuals fitted with satellite transmitters on their breeding grounds in Kazakhstan were tracked to Ceylanpinar. When scientists caught up with them they found a remarkable flock of 3,200 birds, the largest numbers recorded in over a century. The satellite trackers revealed that the birds departed Turkey in late October, eventually arriving in central Sudan after a total trip of more than 5,000 miles (Anon. 2008). The species had not been seen this far south in Africa for 20 years.

The discovery of the birds’ migration route and Sudanese wintering grounds is an important step towards safeguarding the species. Conservationists from the Sudanese Wildlife Society are currently working to locate and conserve the newly discovered wintering population, while Birdlife partners in Turkey, Syria and Kazakhstan are involved in work to protect key stopover and breeding sites. Research in Kazakhstan has provided a much better understanding of the breeding ecology, and indicates that factors on the breeding grounds do not appear to be limiting the population size. Instead, threats on migration and in wintering areas, such as hunting, may be more important. Thanks to the coordinated research and conservation efforts of scientists in Africa, Europe and the Middle East there is now fresh hope for the future of one of the region’s rarest birds.