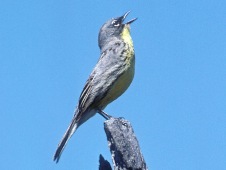 In the early 1970s, the population of Kirtland’s Warbler was reduced to just a few hundred individuals but, by 2008, there was a spectacular increase owing to intensive management of jack pines in the breeding areas. 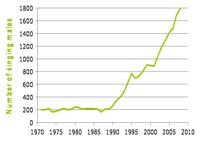 The recent recovery of Kirtland’s Warbler Dendroica kirtlandii illustrates the potential of active habitat management in securing populations of threatened species. The warbler’s exacting requirements for breeding habitat are stands of young (5–23 year old) jack pine Pinus banksiana growing on well-drained soils (Probst et al. 2003). Owing to these strict requirements, its breeding range had been confined to a small area in the Lower Peninsula region of Michigan, USA until 2007 (Eskelsen 2007). Counts of singing males in 1951 and 1961 totaled 432 and 502 respectively, but this declined to 201 in 1971 (Probst et al. 2003). A suite of measures was then put in place to stabilise the population.

These included control of Brown-headed Cowbird Molothrus ater (a brood parasite of the warbler), annual population censuses and active management of the species’s jack pine habitats. The population remained relatively stable between 1971 and 1987, with suitable habitat regenerating after wildfires or management action apparently offset by ‘losses’ owing to the increasing over-maturity of many older pine stands (Probst et al. 2003). However, following further management action and two large wildfires, the amount of suitably aged habitat doubled between 1987 and 1990, and the warbler population more than tripled between 1990 and 2000 in response (see figure) (Probst et al. 2003). In 2008, the population had increased to 1,792 (Anon 2008). Management techniques including annual removal of Brown-headed Cowbirds and 3,000 acres of jack pine being cleared and replanted each year has lead to a stable core population in Michigan (Higgott 2008). The ever increasing population size has meant that the warblers are now increasing their range and, in both 2007 and 2008, breeding nests were found in Wisconsin and Ontario (Eskelsen 2007, Anon 2008). Conservation strategies are now being investigated at their wintering grounds in the Bahamas to potentially increase survival during migration (Carey et al. 2004).

Recommended Citation:
BirdLife International (2008) Intensive habitat management has led to a spectacular increase in Kirtland's Warbler . Downloaded from http://www.birdlife.org on 29/01/2023