In the Arctic tundra, climate change will cause dramatic losses in waterbird breeding habitat 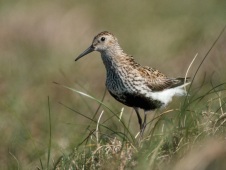 The Arctic is likely to undergo some of the most dramatic changes in climate, which are predicted to lead to a raid loss of tundra habitat. Species that are distributed at the polar edges of continents have limited opportunities for dispersing to new areas of suitable habitat, and may be among the hardest hit by climate change.

Breeding range of Dunlin in the Arctic superimposed on tundra habitat, with predicted changes as a result of climate change 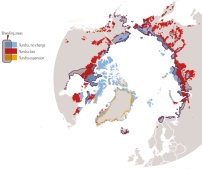 The Arctic region showed the most pronounced warming of any part of the globe in the last century. This trend is set to continue, with warming of up to 5°C in the next 50–80 years predicted by some models Neilson and Drapek (1998). Considerable changes in vegetation cover are predicted by all models: boreal forests are likely to spread northwards, perhaps at a rate of 0.2–2 km/year (Huntley 1996). As there are few areas where tundra is expected to expand, there will be a consequent net loss of 45–71% of the area of tundra if CO2 levels double, a scenario that is predicted to occur by 2070–2099 (Zöckler and Lysenko 2000).

The Arctic tundra is the main breeding habitat for many migratory waterbird species, comprising 23–27 million individual geese and waders (Zöckler 1998). Many species will be severely impacted by the loss of tundra habitat. A study of 23 Arctic waterbirds showed that, on average, they may lose 35–51% of their breeding range (Zöckler and Lysenko 2000). For example, Dunlin Calidris alpina could lose up to 58% of its breeding habitat in this time-frame (see figure), Red-breasted Goose Branta ruficollis (already classified as Vulnerable) may lose up to 85% and Spoon-billed Sandpiper Eurynorhynchus pygmeus (Endangered) could lose up to 57% (Zöckler 1998, Tomkovich et al. 2002). Such results show how climate change may impact species that are distributed at the polar edges of continents, and which may therefore have limited opportunities for dispersing to new areas of suitable habitat.

Recommended Citation:
BirdLife International (2004) In the Arctic tundra, climate change will cause dramatic losses in waterbird breeding habitat. Downloaded from http://www.birdlife.org on 28/01/2023