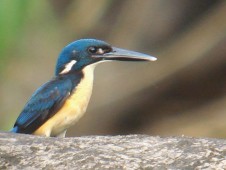 Forests on New Britain have been rapidly destroyed in recent years, largely to clear land for oil palm plantations. This has led to rapid population declines for many restricted-range and endemic bird species.

In Papua New Guinea, the island of New Britain is of high global conservation importance because it supports a large number of endemic and restricted-range birds: 37 species are found only on the island or have global ranges of less than 50,000 km2. Using remotely sensed data from satellite imagery, it has been estimated that 12% (3,000 km2) of the island’s forest was cleared between 1989 and 2000, equating to a rate of forest loss of c.1.1% per year. Lowland forest has been hardest hit, with nearly a quarter of the forest below 100 m disappearing over the study period. If current rates of deforestation continue, all forest below 200 m will have been cleared by 2060 (Buchanan et al. 2008).

Birds are undoubtedly suffering as a result of this extensive habitat loss, especially those species largely restricted to lowland forest. Four species are now suspected to be declining at rates exceeding 30% over three generations (Black Honey-buzzard Henicopernis infuscatus, Blue-eyed Cockatoo Cacatua ophthalmica, Russet Hawk-owl Ninox odiosa and Bismarck Kingfisher Alcedo websteri) and five more are thought to be declining at rates approaching this threshold. The total number of endemic or restricted-range species classified as globally threatened or Near Threatened on New Britain as a result of population declines from forest clearance has increased from 12 to 21 (Buchanan et al. 2008).

The very high rates of deforestation on New Britain appear to be driven largely by clearance for large commercial oil palm plantations. Satellite images show that c.320 km2 (11%) of the total land cleared of forest had been converted to oil palm plantations by 2000, with much of the clearance very recent and conversion planned for a considerably larger proportion. Forest-dependent species generally cannot survive in oil palm monocultures. In South-East Asia, forest conversion to oil palm plantations has resulted in severe reductions in bird species richness (Aratrakorn et al. 2006), and on New Britain itself monocultures of oil palm trees over short grass are known to support none of the island’s 37 restricted-range or endemic species (LeCroy and Peckover 1983).