In Nigeria, the BirdLife partner is assisting wetland restoration to safeguard ecosystem services 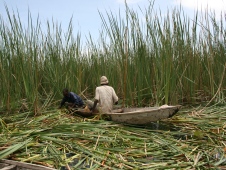 Through community participation, the degradation of part of an important African wetland has been reversed. As a result, bird populations have increased and the essential ecosystem services on which local livelihoods depend have been secured. These tangible benefits will hopefully inspire other communities in the region to establish similar schemes.

The Hadejia-Nguru Wetlands, an Important Bird Area and Ramsar site, lie on the southern edge of the Sahel savanna in north-eastern Nigeria. The area is a floodplain comprising permanent lakes and seasonally flooded pools connected by a network of channels. The wetlands are an important wintering site and staging ground for waterbirds migrating between Europe and Africa. At times, the area supports over 423,000 birds of 68 species, including significant numbers of Ruff Philomachus pugnax, Spur-winged Goose Plectropterus Gambensis, Ferruginous Duck Aythya nyroca and Black-tailed Godwit Limosa limosa.

The wetlands are a vital resource for local communities, providing water for crop irrigation and verdant grazing land for livestock. They are also a major source of fish, supplying approximately 6% of Nigeria’s inland fish catch with a market value of nearly US$300,000 per annum. In total, about 1.5 million farmers, herders and fishermen depend on the wetlands for their income and subsistence. Many more people rely on drinking water from wells and boreholes fed by the wetland.

Unfortunately, the construction of dams upstream has had a major impact on the natural functioning of the wetland system. Annual flooding events have become irregular providing conditions for the rapid colonisation of Typha, a native but highly invasive reed species. The Typha quickly overruns channels and water bodies, stemming the flow of water to seasonal pools and lakes. The speed at which the Typha has spread has been exceptional. In five years, the area covered by the invasive reed increased from just 550 ha to over 200 km2. The Typha has now colonised a substantial portion of the wetland, significantly impacting the region’s biodiversity and the livelihoods of local people. As productive farmlands and fishponds have become choked, some communities have been forced to move away. At the same time, other villages have been displaced by flooding caused by blocked waterways.

In response, the Hadejia-Nguru Wetlands were chosen as the location for a demonstration project of the UNEP/GEF Wings Over Wetlands (WOW) initiative—a partnership of international conservation organisations and national governments that aims to conserve migratory waterbirds along the African–Eurasian Flyway. This collaborative project between BirdLife and the Nigerian Conservation Foundation (NCF; BirdLife in Nigeria) initially enabled one community—Dabar Magini—to restore a significant tract of wetland habitat, followed by two additional neighbouring communities. In each case a village committee was established to organise the manual clearance of Typha with tools provided by the WOW partners. As a result, local working parties made up of farmers and fishermen were able to clear over 25 km of waterways. The wetland restoration has brought immediate benefits to the local community, with enhanced water flow to farmlands and dramatic increases in the number and size of fish available to fishermen. As a result, socioeconomic studies showed considerable increases in household incomes. Bird numbers have increased too: from 46,055 birds of 37 species wintering in 2008 to 129,186 of 65 species by 2009.

This project has empowered an entire community to foster local solutions to the environmental challenges they face. Furthermore, they have independently set up their own maintenance programme, making the initiative self-sustaining. The lessons learnt at Dabar Magini will hopefully be used to establish similar schemes in other communities throughout the region.