In Hawaii, climate change will increase the impact of disease 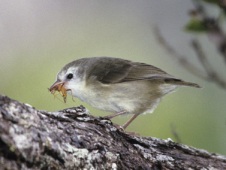 Endemic birds in the Hawaiian Islands have already been severely impacted by avian pox and malaria, transmitted by introduced mosquitoes. The area of forest with medium and low malaria risks for native bird species in forest reserves on three Hawaiian islands is predicted to decrease substantially following a temperature rise of 2ºC. Thus reforestation of pasture land at higher elevations will be crucial to improving the chances of survival for these species.

The area of forest with high, medium and low malaria risks for native bird species in forest reserves on three Hawaiian islands

Endemic birds in the Hawaiian Islands have been severely impacted by avian pox and malaria, transmitted by introduced mosquitoes. These are restricted to the lowlands, so cooler high-elevation forests remain the last refuge for 18 threatened bird species, mainly honeycreepers (Drepanididae). In the Pacific islands, as elsewhere, climate change is predicted to lead to the lifting of the cloud-base, and consequent upward shifts of montane cloudforests (Still et al. 1999). Thus, in Hawaii, as temperatures rise, the altitudinal zone of malaria risk will also shift upwards. In some areas, the coolest (and hence safest) cloudforest zone is constrained in its upward shift, because the higher elevations have been cleared for pasture.

The effects of climate change on the extent of forests with high to low malaria risks have been modelled for three specific areas (representative of the most intact forest and highest abundance of native species) on the islands of Hawaii, Maui and Kauai (see figure; Benning et al. 2002). The results show increases in the areas of high malaria risk, and reductions or disappearances of areas with low risk. For example, a temperature increase of 2ºC will almost eliminate low malaria-risk forest in the Hakalau Wildlife Refuge on Hawaii (an important area for five threatened bird species). Forestation of pasture land above the refuge is crucial to improving the chances of survival of the endemic species.

Recommended Citation:
BirdLife International (2015) In Hawaii, climate change will increase the impact of disease. Downloaded from http://www.birdlife.org on 07/07/2022