In Australia, fires are linked to habitat changes and the decline of many bird species 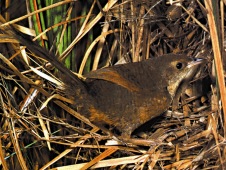 In Australia, the changes in the fire regime following European settlement were a major factor in the extinction of at least five bird taxa. Currently, fires are threatening 17 of Australia’s 52 Vulnerable, Endangered, and Critically Endangered bird species. The effects on bird biodiversity are varied, with some species benefiting from the immediate consequences of fires, while for others fires are the predominant likely cause of decline. Although high local temperatures and lengthy dry seasons mean fires are an integral component to the Australian tropical savanna ecology, the extent and severity of these fires is expected to increase under project climate change.

While habitat loss and growing human population has led to the depletion of natural habitat globally, in Australia where there is proportionally low human density, fire is a dominant driver of biodiversity change (Woinarski and Legge 2013). Humans have used fire to mould the landscape and wildlife of Australia since pre-history. Aboriginal people entered the continent 60,000–100,000 years ago and used small fires for hunting and land clearance. In south-western Australia, areas were burned every 5–10 years and fires were scattered and of relatively low intensity, resulting in a mix of habitats with a high diversity of plant species. This environmental heterogeneity in turn promotes bird biodiversity (Stein et al. 2014). Similarly, an increased number of fire age-classes has been linked to greater bird biodiversity in Australian forests (Stitters et al. 2014). However, once Europeans took over land management, the practice and purpose of burning changed rapidly. Early European colonists burned heathland more often; every 2–3 years. This fire regime favoured the development of grasslands, which replaced other habitats and provided habitat for grazing livestock. Destructive and extensive burns were also used to aid land clearance or to show European ownership (Gill et al. 1999). Furthermore, the past 200 years of European Agriculture have depleted 58 million km2 of eucalypt woodland and mallee woodlands and shrublands in southern Australia as part of intensive wheat and sheep production (Vesk and Mac Nally 2005).

The changes in the fire regime following European settlement were a major factor in the extinction of at least five bird taxa (Gill et al. 1999). Species are lost because frequent fires alter the plant species composition and vegetation structure of their habitats (Gill et al. 1999), meaning that fire-sensitive vegetation cannot be maintained. Inappropriate fire regimes are recognised as a major threat for 30% of Australia’s threatened bird species. One example is the Endangered Noisy Scrub-bird Atrichornis clamosus, pictured above, which avoids areas that are burnt more often than every six years, and reaches its highest densities only after 20–25 years of vegetation regrowth (see figure) (Smith 1985). Habitats particularly at risk are heathland and mallee, already depleted because of agricultural intensification (Gill et al. 1999; Vesk and Mac Nally 2005). Fire has also been recognised as one of the leading threats that makes tropical savannas, drier rainforests, and the temperate eucalypt woodland more vulnerable to tipping points (Laurance et al. 2011). Tropical savannas contribute approximately 20% of Australia’s land area and comprise 75% of the area burnt each year.

Although there have been no further species extinctions since the European settlement, the Tiwi Island subspecies of Hooded Robin Melanodryas cucullata melvillensis is classed as critically endangered (possibly extinct). The leading cause of this possible extinction is believed to be a change in fire regime from intricate fine scale burns to more extreme burns over extensive areas and low frequency burns in remote areas (Australian action plan 2010; Garnett et al. 2011). Some species benefit from fires, such as certain species of raptor and insectivores that track fires in order to exploit prey flushed out of the habitat. For example, the aptly-named Flame Robin was the only species to respond positively to higher degrees of burnt forest in Australia. However, the fire regime has been identified as a driving force for population declines in multiple other bird species, especially granivores, frugivores, hollow-dependent species, and ground-nesting species (Woinarski and Legge 2013). Species with long incubation time, such as the Emu Dromaius novaehollandiae are also likely to suffer adverse consequences. In order to avoid serious detrimental effects to biodiversity, Woinarski and Legge (2013) suggest that within conservation reserves:

Recommended Citation:
BirdLife International (2017) In Australia, fires are linked to habitat changes and the decline of many bird species. Downloaded from http://www.birdlife.org on 09/08/2022