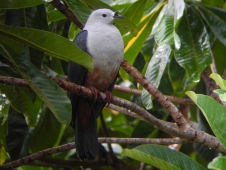 Micronesian Imperial-pigeons (belochel) are declining in Palau, despite their cultural and ecological importance. Both population and range have declined since 1991, even though there are strict national laws that prohibit the harvest or harm of these birds. Illegal hunting for general consumption is driving this decline. The Palau Conservation Society (BirdLife in Palau) is working with communities to raise awareness of the plight of this bird.

On the small island nation of Palau, Micronesian Imperial-pigeons Ducula oceanica (belochel) are vitally important to cultural practices. Traditionally they were fed to Palauan babies as their first meal of solid food, a sign of parental love. As one of Palau’s largest native birds, belochel are also important ecologically, and are responsible for the dispersal of seeds across the islands. Micronesian Imperial-pigeons are restricted to the Micronesia region, but the population in the Marshall Islands, the only other place they can be found today, is extremely small. Belochel are easily viewed by birdwatchers to Palau and thus have economic importance as well.

Unfortunately, belochel are in decline in Palau (VanderWerf 2007). The species declined by 40% between 1991 and 2005, from an estimated population of 13,718 to 8,175 birds (Figure a; Engbring 1992, VanderWerf 2007, 2005 national bird survey data). They have declined everywhere, even in protected areas such as Palau’s Rock Islands (Figure b). In addition, there appears to be ongoing range restriction, with recent data showing a decline in the number of sites where they have been recorded between 2005 and 2010 (Figure c; Olsen and Eberdong 2011).  Micronesian Imperial-pigeon is the only bird species in Palau that has climbed in its threat status on the IUCN Red List, going from Least Concern to Near Threatened in 2002.

Figure (b) Changes in population to Belochel, 1991 to 2005 (relative abundance (birds/station), total across all islands 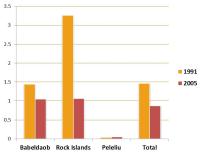 Belochel are fully protected by national law, and it is illegal to harvest, harm, capture, or consume the birds. However, the national law is regularly violated, and illegal hunting and consumption are fueling this species’s demise. Informal surveys of hunters in Palau confirm that demand is high, for general consumption rather than for cultural uses. The national law protecting the bird is relatively weak (FAO 2011), with commercial sale generating more income than the penalties if caught illegally hunting. Anecdotal evidence suggests that the people most likely to serve or consume belochel illegally are elected and traditional leaders, as the serving of belochel is deemed a sign of high status.

Habitat loss, largely from development, and habitat degradation, often from fires, are also causes of belochel declines. Climate change, particularly shifting fruiting seasons and availability, may also be a cause of the decline. 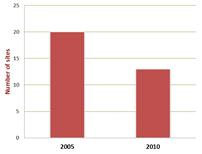 Belochel population declines may be reversed if the hunting pressure on the pigeon is reduced. This requires a greater emphasis on enforcement of the existing national law and similar state laws, both through surveillance and through prosecution of violators (hunters and consumers alike). The national law is also in need of review, and an increase in penalties is likely to reduce hunting pressure. No laws allowing for hunting of belochel should be passed until the bird has recovered. According to the Belau National Museum, sites with the highest belochel densities are already protected. However, stricter enforcement of protected area regulations are needed and better protection of other Important Bird Areas is also needed.

The Palau Conservation Society (PCS) released a “State of Palau’s Birds 2010” report highlighting the decline of the belochel and advocating for its protection. At the same time, PCS released a poster designed with social marketing principles to influence a change in behavior. The poster encourages Palauans to refrain from general consumption of belochel, so that there are birds available for important cultural practices. PCS will continue working with partners, policymakers, and communities to protect belochel.

Recommended Citation:
BirdLife International (2011) Illegal hunting is causing the decline of belochel (Micronesian Imperial-pigeon) in Palau. Downloaded from http://www.birdlife.org on 05/07/2022