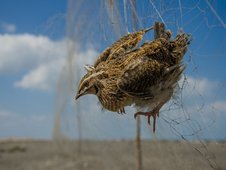 There are a wide variety of techniques used to trap wild birds. Some are lethal, while others allow birds to be captured alive. In the European Union, in accordance with the Birds Directive, Member States must have specific laws and regulations. Thus, the trapping and consumption of songbirds is mostly illegal across the European Union, but it still occurs illegally in some Member States such as France and Italy. Trapping of certain species is also still allowed in Malta. Around the Mediterranean, birds are specifically caught during the migratory seasons. Wild birds may be captured for as a regional, traditional delicacy or for keeping or selling as a pet.

Types of trap used for illegal trapping of wild birds

Lime-sticks are twigs about 50-70 cm long that are streaked with a sticky type of glue. These sticks are placed in open areas or gardens in bushes, or sometimes inserted into the ends of bamboo poles, to provide perches for birds. Any bird landing on a lime-stick gets stuck. This method is known as “gluaux” in France.

Snares can be anchored cables, wire nooses or made from horsehair. Birds are lured by berries to perch on the horizontal stick. This causes the bow to spring apart and the bird’s legs are caught in the cord. They then hang head downwards until they are killed by the trapper. Snares are one of the simplest traps and most often used to kill birds. They are known as “tenderie” in France.

A deadfall is a heavy rock or wooden log that is tilted on an angle and held up with sticks. One of the sticks serves as a trigger. Such traps are known as “tendelle” in France and as a “stone-crush trap” in Croatia.

Snap traps operate on the same principles as a mousetrap - when a bird, lured by a worm or berry, brushes against the sensitive release mechanism, the clamp snaps shut and crushes the bird. Death is usually instant.

These are traps designed to catch birds of prey or shrikes. The cage is constructed using mesh wire with nylon nooses on top. Inside the cage, a visible live rodent, small bird or pigeon is placed as bait. The bird of prey that attacks the bait will be snared by its legs.

Mist-nets are typically made of nylon mesh suspended between two poles. The grid size of the mesh netting varies according to the size of the species targeted for capture. Net dimensions are approximately 1–4 m high by 6–15 m long. They are known as 'Trammel nets' in Egypt.

Mechanism allowing poachers to trigger nets (several hundred square metres in area) to clap together over the birds, when enough individuals have landed in the trap area. Trap known as a “Filets matoles” in France.

Used in Egypt and composed of grass or sticks in a tent like structure to catch grounddwelling birds seeking shelter (quail, larks, wheatears, corncrakes etc.).

Trees and scrub are covered in large mist-nets to catch perching species, technique used in Egypt.

Tape-luring is often combined with bird trapping to increase the number of bird caught. A speaker is used ot play the song of a specific species or a mixture of several species  in a loop. Tape-luring is often used in studies of bird migration, and the technique can strongly augment the total number of birds captured. Tape-luring can increase the capture probability of birds already at site and attracting birds that normally would have overflown the site. Not all species react in autumn on tape-luring, but especially Eurasian Blackcaps Sylvia atricapilla are known to be strongly attracted by the played song.

Netted, glued and eaten whole – Can we keep this songbird free?

Slaughter of the song birds (Nature 2016)

Review of the illegal trapping of trushes in Spain (Murgui 2014).

Plan of Action to Address Bird Trapping Along the Mediterranean Coasts of Egypt and Libya (CMS 2016).