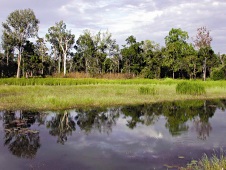 Following representations by provincial leaders, Lo Go Xa Mat, an area of lowland forest and wetland in southern Vietnam, was designated a National Park in 2002. Surveys had revealed the site qualified as an Important Bird Area while subsequent meetings with stakeholders generated considerable local interest in its value for biodiversity, resulting in the request for its formal protection.

Lo Go Xa Mat is an area of lowland forest and wetland in Tây Ninh province of southern Vietnam, located in the Southern Vietnamese Lowlands Endemic Bird Area. The site was declared a protected area by the government of Vietnam in 1986, but this was to commemorate its historical importance as a revolutionary base during the Second Indochina (Vietnam–America) War. In January 2001, following reports that the site had been designated for village resettlement, the BirdLife International Vietnam Programme undertook a reconnaissance trip. Lo Go Xa Mat was found to support a mosaic of lowland habitat types almost lost from elsewhere in Vietnam, but these were under severe and immediate threat from conversion to agricultural land. Indeed, drainage canals and roads were already under construction.

In response to these threats, BirdLife and the International Crane Foundation convened a meeting with provincial leaders to explain the importance of the site for conservation, and to raise awareness of the threats posed by the resettlement project. The response from the provincial leaders was positive: they agreed to halt the project temporarily, pending a more detailed biodiversity assessment.

Consequently, in October 2001, BirdLife led a joint survey of Lo Go Xa Mat. The site was found to qualify as an Important Bird Area (IBA) due to the presence of a number of globally threatened birds and restricted-range species, including Germain’s Peacock-pheasant Polyplectron germaini (Vulnerable). The designation of the site as an IBA was announced at a provincial workshop, generating much interest among local leaders, who were hitherto unaware of the biodiversity value of the site. Immediately following the workshop, the provincial leaders made an official request that the site be designated a National Park. Based on this, Lo Go Xa Mat was declared a National Park by the prime minister in July 2002. Subsequently, central government approved US$ 2 million of funding for the site over a five-year period.

Recommended Citation:
BirdLife International (2004) Identification of Lo Go Xa Mat as an IBA in Vietnam resulted in its being declared a national park. Downloaded from http://www.birdlife.org on 08/02/2023