IBAs form a coherent network of sites for conservation, even under climate change 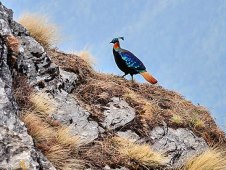 Turnover in the bird species occurring in IBAs in sub-Saharan Africa and South East Asia is projected to be high under future climatic scenarios. However, 88-92% of species of conservation concern are projected to have suitable climatic conditions remaining by 2085 in at least some sites where they currently occur across Africa, and no species will have no suitable climate within the Asian network by the end of the century. This demonstrates that existing IBAs will remain important for conservation under climate change. 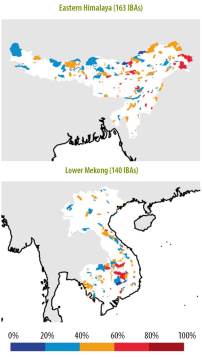 Protected areas are a vital tool in conserving species facing a range of threats such as land use change and hunting. These areas are however based on current range distributions, and ranges are expected to shift drastically with climate change (Langham et al. 2015, Huntley et al. 2008, Barbet-Massin et al. 2009, Hole et al. 2009, Araujo et al. 2011, Bagchi et al. 2013). These shifts are likely to result in considerable ‘turnover’ in the composition of bird communities occurring in IBAs, protected areas and other sites.

For IBAs in South East Asia, species distributions were projected for 2025, 2055, 2085 using climate projections based on three emission scenarios and four types of climate model to account for uncertainty in species distribution outcomes. Turnover of species was predicted to be high—increasing from 19% in 2025 to 43% by 2085 and with 45% of species expected to have less suitable climate in these sites by 2085. When accounting for uncertainty in predictions, 47% of IBAs were projected to be climatically suitable for less species than they do currently, whilst only 11% were expected to become suitable for more species.

Across IBAs in Africa, the median projected turnover of all bird species is expected to rise from 10-13% in 2025 to 20-26% by 2085 with expected turnover higher for birds of conservation concern; rising from 18-21% to 35-45% by 2085, likely due to the increased specialist nature of these species compared to more generalists. The overlap between the current distribution and predicted future distribution is just 31.5% compared to all bird species with 56.3% of their range overlapping.

Despite this high level of turnover, the IBA networks as a whole will retain suitable climatic conditions for the great majority of species of conservation concern. For example, in sub-Saharan Africa, only 7 out of 815 species of conservation concern (<1%) are projected to have no suitable climate within the network of 863 IBAs by the end of the century (Hole et al. 2009). Similarly, in the Eastern Himalaya and Lower Mekong regions of Asia, while 45% of species are ‘extremely likely’ to experience a reduction in suitable climate within the IBA network, for no species is suitable climate ‘extremely likely’ to be completely lost from the network (Bagchi et al. 2013).

Recommended Citation:
BirdLife International (2015) IBAs form a coherent network of sites for conservation, even under climate change. Downloaded from http://www.birdlife.org on 05/07/2022