IBAs for the marine environment are being identified in many regions 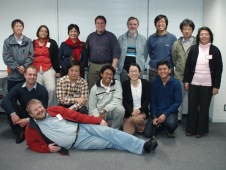 Over 3,000 Important Bird and Biodiversity Areas (IBAs) for seabirds have been identified, capturing important locations for many critical stages of the life-cycles of seabirds.

Many seabird species are spectacularly mobile, travelling thousands of kilometres across international waters and multiple Exclusive Economic Zones and only return to land to breed. They face many serious conservation challenges and are now the most threatened group of birds. Given the long periods that seabirds spend at sea, the multiple threats they face and the vast distances they cover, identifying a network of priority sites for their conservation is a challenge—but vital to ensure their future survival.

Since 2005, BirdLife Partners in over 40 countries have been working to identify marine IBAs as priority sites for seabird conservation (BirdLife International 2010a). Capacity building workshops held in Central America, the Mediterranean, East Asia and the West Indian Ocean have helped ensure model projects have been established in all BirdLife regions. Partners are now sharing experiences relating to the collection and analysis of a range of data sources to define boundaries and apply IBA criteria in a consistent and comparable fashion in the marine environment (BirdLife International 2010b). At-sea surveys (both vessel and aerial based) and satellite tracking data have formed the core components for many projects. New, innovative ways to assess and predict seabird distribution and abundance in the marine environment are also being developed to allow IBA designations to be made.

Projects have focused on understanding seabird life-cycles and identifying those areas where birds are thought to congregate in the greatest numbers and be at their most vulnerable to threats. Thus: seabird breeding colonies; feeding, rafting and roosting areas around these colonies; coastal congregations in the non-breeding season; migration and passage bottlenecks; and remote pelagic feeding areas have all been captured within the IBA network through this approach.

These projects have been supported by the development of a number of new global databases, including the largest satellite tracking database for the marine environment which has been populated via the provision of data from over 100 seabird scientists worldwide. These data are now accessible via a dedicated website—www.seabirdtracking.org. In addition, data on seabird foraging ranges and habitat preferences for many coastal species have been collated from extensive literature reviews, and summarized into factsheets made available through an editable wikispace—http://seabird.wikispaces.com/.

In October 2012 Birdlife launched its first global inventory of marine IBAs to showcase the range of sites and the progress being made across the BirdLife Partnership. The marine e-atlas is available exclusively online and dynamically links together a range of information relevant to marine IBAs. It can be viewed at http://maps.birdlife.org/marineIBAs/default.html.

Recommended Citation:
BirdLife International (2013) IBAs for the marine environment are being identified in many regions. Downloaded from http://www.birdlife.org on 29/11/2022