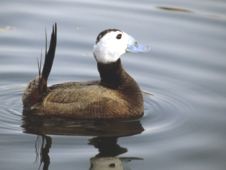 By the 1970s, the Spanish population of White-headed Duck was close to extinction. However, following the prohibition of hunting at its stronghold lagoon and various habitat measures, the population began to recover and spread, and now numbers c.2,500 individuals.

White-headed Duck Oxyura leucocephala has a fragmented distribution, with a small, resident population in Spain, Algeria and Tunisia, and a larger, mainly migratory, population in the east Mediterranean and Asia (Green and Hughes 1996). Destruction and degradation of its wetland habitats, combined with hunting (to which it is extremely susceptible), have caused rapid population declines across much of its range and, consequently, it is considered Endangered (BirdLife International 2004). By the 1970s, the Spanish population was close to extinction, with counts in 1977 recording just 22 individuals, confined to a single lagoon in Córdoba province, Andalucía (Green and Hughes 1996, Torres 2003).

In 1979, however, a highly successful conservation programme was initiated. Following the prohibition of hunting at its stronghold lagoon, the population began to recover, and the species gradually expanded into the adjoining Andalucían provinces of Sevilla, Cádiz and Huelva. By 1988, the population exceeded 400 birds, and breeding had spread into the provinces of Almería and Toledo. Despite fluctuations linked to levels of spring rainfall, the Spanish population is now c.2,500 individuals (see figure), with breeding activity in 13 provinces, including Mallorca (where it was introduced in 1996; Torres 2003, Madroño et al. 2004).

This striking recovery resulted from a combination of conservation actions, coordinated by a Species Action Plan (Green and Hughes 1996). Effective protection from illegal hunting in its Andalucían stronghold was undoubtedly the most important factor, but habitat measures—including removal of introduced fish, control of pollution and sedimentation, and regeneration of fringing vegetation—were also significant. Currently, the most important threat to the species’s long-term survival is hybridisation with introduced Ruddy Duck O. jamaicensis originating from the feral UK population (Madroño et al. 2004). However, control of introduced Ruddy Ducks is now underway in the UK and a number of other countries.