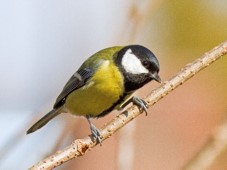 In the Czech Republic, higher temperatures have allowed populations of Edible Dormouse Glis glis to increase, leading to increased predation of the nests of woodland birds such as Great Tit Parus major and Collared Flycatcher Ficedula albicollis.

Species across taxonomic groups are shifting the timing of biological events in response to climate change, as warmer temperatures bring forward the timing of spring (Thackeray et al. 2010). Variation in the rate of change has often resulted in a mismatch between the timing of bird breeding and the peak abundance of prey items required for effective chick rearing (Both et al. 2006, Mckinnon et al. 2012). In fact, the implications of this asynchronous behaviour on bird success is thought to be even further reaching than that of just finding adequate prey. Shifts are bringing together species that may not have previously interacted, resulting in novel species interactions and implications for bird breeding success.

Climate change induced shifts in phenology in edible dormice and woodland birds have resulted in increased predation rates on bird nests, as calculated using nest box populations in the Czech Republic (Adamik & Kral 2008). Edible dormice Glis glis are small arboreal rodents that are generally known as being frugivore, but are also known to predate on cavity bird nests post hibernation (Juškaitis 2000). They spend 7-8 months of the year in hibernation, with warming temperatures acting as a cue for spring emergence.

Nest box populations were monitored annually in the study region near Dlouha Loucka, Czech Republic between 1980 and 2005 (Adamik & Kral 2008). Annual seed production was estimated for beech and oak trees and May temperatures obtained from a weather station 2km from the study area. Collared Flycatchers Ficedula albicollis were the most common bird in the study region, occupying on average 22% of the boxes, with Great Tits Parus major occupying 16%, Blue Tits Parus caeruleus 8% and Wood Nuthatches Sitta europaea 7%.

As spring temperatures increased, the Pied Flycatcher significantly advanced its laying date, seed crop numbers increased, edible dormouse advanced their emergence and their numbers rose. The rise in dormouse numbers is likely a result of increased seed crop productivity or warmer temperatures reducing the energetic costs of hibernation, with positive effects on both survival and breeding success.

As dormouse numbers increased, so did predation rates on the woodland bird species, with losses being greatest for the Collared Flycatcher. The shift to earlier breeding times for flycatchers has therefore not been enough to escape predation. In contrast, in years where Great Tits breed earlier, predation was largely avoided. Predation rates were linked to the emergence date of the dormice, but the increase in dormouse abundance had the greatest effects on nest predation.

Increasing spring temperatures are shifting bird breeding and edible dormouse phenology and influencing predator numbers through interactions with high seed crop abundance. These changes are influencing the predation risk on cavity nesting birds and demonstrates the profound impact of climate change across taxonomic groups, food webs and in the functioning of ecosystem processes.