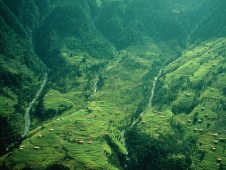 The Palas Valley Important Bird Area in Pakistan has experienced an increase in extreme weather events over recent years. In response, BirdLife is promoting sustainable activities in the region that rely on healthy forests. This not only provides income for local communities, it also helps safeguard the vital ecosystem services necessary to protect against the worst impacts of climate change.

The Palas Valley Important Bird Area includes the largest single tract of Western Himalayan temperate forest habitat in Pakistan. Eight of the 11 species characteristic of the Western Himalayas Endemic Bird Area occur in the valley and the population of Vulnerable Western Tragopan Tragopan melanocephalus is believed to be the largest remaining in the world. Palas also contains the largest known population of West Himalayan elm Ulmus wallichiana and is also home to the Endangered snow leopard Panthera uncial.

Extreme weather events and other natural disasters have disrupted the lives of communities living in the Palas Valley several times in recent years. In 1992, a ‘100-year’ flood caused widespread destruction to the valley, destroying housing and infrastructure such as bridges, watermills and irrigation channels, and washing away farms and stores of food and fodder. Floods and landslides again rocked the area in 2007. The increase in summer and winter precipitation over the last 40 years in Northern Pakistansuggests that such events could become increasingly common (Archer and Fowler 2004, Cruz et al. 2007). Evidence following these events showed that damage was less in valleys where forests covered the mountain slopes and helped regulate run-off, compared to neighbouring valleys where widespread deforestation had taken place.

The forests in Palas are entirely owned by local tribes, though they have to be managed according to a management plan agreed with the Provincial Forest Department. Working with a number of national Partners, including WWF-Pakistan, the Government of North-West Frontier Province and the World Pheasant Association, BirdLife has been supporting development and the sustainable management of forests and natural resources in the Palas Valley since 1992. Working together on organisational capacity development with tribe-based institutions, BirdLife and others have supported production of a management plan focused on delivery of a range of natural resource goods and services, with particular attention to harvesting and marketing of non-timber forest products that require healthy forest ecosystems.

The project is expected to provide income from the sale of sustainably harvested timber, while also providing the ecosystem services that are so important to local people and that will support adaptation to climate change. Unpredictable weather events resulting from climate change will only increase the importance of this local resilience linked to the health of intact forest ecosystems.