Growing threats to Northern Bald Ibis in the Middle East 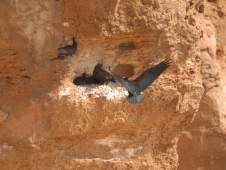 Tadmur desert and mountains IBA in Syria holds the last remaining population of the Critically Endangered Northern Bald Ibis Geronticus eremita in the Middle East. The site is facing diverse threats, including agriculture expansion and intensification, road building, oil and gas exploitation and hunting. The Syrian Society for Conservation of Wildlife (BirdLife in Syria) has been working to increase local capacities and awareness.

By the end of last century, the wild-ranging Eastern population of Northern Bald Ibis Geronticus eremita was thought extinct. However, the re-discovery of a small breeding colony in Syria provided hope for conservationists. The breeding ground was declared an Important Bird and Biodiversity Area (IBA) and soon after it was declared a national protected area for this species (MAAR 2005). The site is of high biological value due to the presence of several globally threatened species, including Egyptian vulture Neophron percnopterus, Eastern Imperial Eagle Aquila heliaca  and Sociable Lapwing Vanellus gregarius, which sometimes uses the site as a stop-over area during its autumn migration (Ghazal Asswad, Aspey & Thurlow 2011). It also harbours a diverse plant community, including populations of scarce wild pistachio Pistacia atlantica and endemic species such as Amygdalus Arabica (Chalabi et al. 1997).

The key threats to the area are agricultural expansion and intensification, human intrusions and disturbance. The former is mainly a result of the cultivation of wadies and fertile locations for barley cropping by nomads. This activity destroys irreversibly the natural habitat. The latter is a result from several activities that include road construction, oil and gas mining, indiscriminate hunting. In the long term climate change is likely to result in extended periods of drought across the region.

The recent political unrest in Syria has resulted in a reduction of conservation work in the area. Breaches of the law have also become increasingly common. However, the Syrian Society for Conservation of Wildlife (SSCW, BirdLife in Syria) has continued to carry out activities at the site through coordinating and mobilising local people. SSCW had invested earlier in building capacities and raising awareness of local people and increasing their willingness to protect Bald Ibis by taking responsibility and ownership of this Critically Endangered bird species.