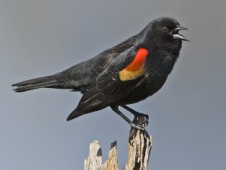 In North America, many common grassland and shrubland birds are declining, apparently in response to ongoing changes in agricultural intensification. One striking example is Red-winged Blackbird Agelaius phoeniceus which is experiencing precipitous declines across the USA.

In North America, many common grassland and shrubland birds are declining due to changes in agricultural intensification (Reif 2013). An analysis of state-level Breeding Bird Survey (BBS) data collected between 1968 and 2011, shows consistent declines in the 65 species breeding in open-country habitats (Sauer et al. 2013). In particular, the 24 obligate grassland species declined by 40% between the BBS interval, whilst 75% of these species possessed negative trend estimates. These population trends highlight the rate at which many common grassland and shrubland birds are decreasing as a result of changes in agricultural practices and land use including farmland expansion and extensive use of pesticides. Loss of breeding habitats and acute pesticide toxicity are particular threats obligate grassland species (Mineau and Whiteside 2013, Reif 2013). One striking example is Red-winged Blackbird Agelaius phoeniceus, one of the most familiar and abundant birds in North America (Jaramillo and Burke 1999, McCracken 2003). Although this species is listed as Least Concern due to the size of the population range (BirdLife International 2017), BBS data indicates it has experienced a significant decline of 0.9% annually between 1980 and 2007 (Walton et al. 2013). For example, between 1974 and 1995 an Ontario Red-winged Blackbird population experienced a 50% reduction in mean harem size, whilst continued declines are predicted to change this species from being socially polygynous to socially monogamous (Weatherhead 2005). . In addition to land use change, direct control programmes have probably also played a significant role in its decline, as well as changes in the extent of rangeland cover which accounted for 30% of inter-state variation in BBS population trends (McCracken 2003).