Forest bird communities are depleted even under selective logging regimes 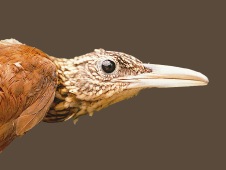 A review of several studies shows that abundance of forest bird species drops by c.30% in selectively logged forests with forest-dependent birds becoming rare. Not all guilds of bird respond similarly to logging, leading to changes in the composition of communities.

Well-managed selective logging of tropical forest allows much biodiversity to persist, and is certainly less damaging than intensive timber extraction or clear-felling. Nevertheless, selective logging decreases both the diversity and abundance of forest-dependent bird species. A review of several studies shows that abundance of forest bird species drops by c.30% in selectively logged forests (Johns 1988, Marsden 1998, Thiollay 1992, 1997) with forest-dependent birds becoming rare. In contrast, birds adapted to farmland, open or degraded habitats are able to colonise selectively logged forest successfully (Fimbel et al. 2001). Not all guilds of bird respond similarly to logging, leading to changes in the composition of communities (see figure). For example, species that feed on insects or nectar typically decrease in abundance (Fimbel et al. 2001). In Neotropical forests, those hardest hit are terrestrial insectivores such as leaftossers (Sclerurus spp.) and ground antbirds such as the antthrushes (Formicarius spp.). Arboreal insectivores, such as certain foliage-gleaners (Automolus spp.) and woodcreepers (Xiphorhynchus spp.), suffer less than their terrestrial counterparts, but significant decreases in abundance are consistently observed (Fimbel et al. 2001). Frugivores, by contrast, appear to be relatively resilient, and frequently comprise a higher proportion of the avian community in selectively logged and ‘secondary’ forests. This is probably because they are often adapted to foraging over large areas, and some species benefit from a more open canopy (Fimbel et al. 2001). However, the increases in frugivores do not compensate for declines of insectivorous species, and the resulting bird community is an impoverished version of the original.