For globally threatened gamebirds, research is laying the basis for strategic interventions 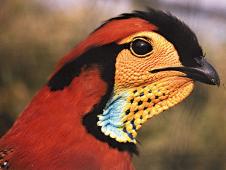 An evaluation of Species Action Plans for globally threatened gamebirds showed that over 60% of priority actions had been initiated during 1995–1999. A comparison of priority projects 1995 versus 2000 showed a shift from research to more direct conservation measures. 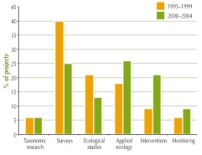 In 1995, IUCN Species Action Plans (for the period 1995–1999) were compiled by the World Pheasant Association (WPA) and the relevant WPA-IUCN Specialist Groups for the three groups of Galliformes (‘gamebirds’): namely, the megapodes (Dekker and McGowan 1995); the partridges, quails, francolins, snowcocks and guineafowls (McGowan et al. 1995); and the pheasants (McGowan and Garson 1995) to recommend priority actions for their conservation. A subsequent evaluation revealed that, of the 54 priority projects identified in the Action Plans, an impressive 61% had been initiated (Fuller et al. 2003) and, as a result of this work, 35 further specific actions had been recommended (Fuller and Garson 2000). For example, research on Brown Eared-pheasant Crossoptilon mantchuricum (Vulnerable) in northern China revealed that excessive disturbance by mushroom collectors was a likely cause of low breeding success, leading to revised management of mushroom collection in protected areas.

A comparison of priority projects identified in the 1995 Pheasant Action Plan with those in the 2000 edition (Fuller and Garson 2000) (covering 2000–2004) shows a progression in the aims of the projects. The earlier projects focused on the compilation of baseline information (e.g. taxonomy, surveys, basic ecological research), while the later ones involve more applied ecological research (e.g. assessing offtake levels) and direct measures (e.g. habitat and protected-area management). Thus, for gamebirds at least, many baseline research actions have been undertaken, allowing well-designed interventions to be planned. The next stage is the implementation of these solutions and the monitoring of their impact to ensure long-term conservation success.

Recommended Citation:
BirdLife International (2004) For globally threatened gamebirds, research is laying the basis for strategic interventions. Downloaded from http://www.birdlife.org on 20/01/2022

Key message: Many actions are underway but there are still gaps
Case studies