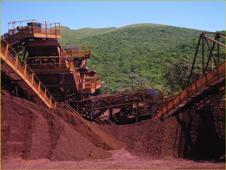 BirdLife is assisting Rio Tinto develop a methodology for offsetting the unavoidable biodiversity impacts of its mining operations. This is being piloted in several places, including the Pantanal region of Brazil. The experience gained from these pilots is informing the development of global principles and guidance for biodiversity offsets.

BirdLife International and a number of other conservation organisations are assisting the global mining company Rio Tinto to develop a methodology for biodiversity offsets. Biodiversity offsets aim to compensate for the unavoidable residual impacts on biodiversity of development projects, through the identification and protection of sites with equivalent or greater biodiversity values elsewhere. The methodology being developed by Rio Tinto is being piloted at several mining operations, including the MCR iron ore mine in the Pantanal region of Brazil. This initiative is being driven by Rio Tinto's commitment to achieve a 'net positive impact' on biodiversity, and a Brazilian legal requirement for developers to make compensatory investments in biodiversity conservation.

An initial desktop study of biodiversity offset options for a proposed expansion to the MCR mine and an associated steel centre was conducted in 2007 by BirdLife and the other conservation organisations. This study was followed by a workshop with local experts familiar with the biodiversity values of the MCR mining lease and the surrounding area. The two exercises contributed to a review of biodiversity offset options for the mine expansion and steel centre.

The review began by cataloguing components of biodiversity (species, vegetation communities and ecological processes) recorded or predicted to occur at each impact site, and then screened them against a series of filters, to identify those for which offsets were a high priority. The review next prepared a list of candidate offset sites, and reviewed each one to identify sites that supported as many as possible of the components of biodiversity for which offsets were required.

Components of biodiversity for which offsets were assessed as being a high priority included montane savanna and semi-deciduous seasonal forest, plus several individual species. A number of candidate offset sites were identified that supported some of these components, although no single site could be found that supported them all. Some of the candidate sites were unprotected, while others were designated as protected areas (either government or private) but in need of additional investment to strengthen their management. The next step was to review the non-biodiversity factors determining the suitability of each candidate site as a biodiversity offset, including land tenure arrangements, land prices and opportunity costs.