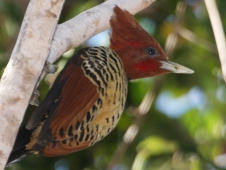 Kaempfer’s Woodpecker (Critically Endangered)—rediscovered in 2006 in the Brazilian cerrado woodlands, 80 years after the type specimen was collected in 1926—is threatened as a result of agricultural expansion. © Ciro Albano

The cerrado covers 21% of Brazil, hosts 935 bird species and 10,000 plant species, and is an important carbon store, but farming has reduced it to less than half of its original size. The growing demand for food and biofuels has led to large-scale cultivation of soybean and sugarcane, forcing cattle ranchers and slash-and-burn farmers to re-locate ever deeper into the Amazon rainforest.

Production of soybean and area harvested in Brazil 1986–2008

The cerrado is located in Brazil’s central highlands covering approximately 21% of the country (Klink and Machado (2005). By 2004, large-scale soybean farming and other farming had reduced the size of this unique habitat to 43% of its original size. Around 1% of the remaining cerrado is lost every year (Butler 2007).

The cerrado is a mixture of different habitats, from dry forest and woodland savannah, to scrub and open grassland, penetrated by the streams and rivers of three major Brazilian drainage basins (Da Fonseca et al. 2004). It is the world’s most wildlife-rich savannah, containing 935 bird species, including the Critically Endangered Kaempfer’s Woodpecker Celeus obrieni and Cone-billed Tanager Conothraupis mesoleuca (BirdLife International 2008), and nearly 300 species of mammals, with threatened species such as the Giant Anteater, Pampas Cat and Maned Wolf (WWF 2007). Together with hundreds of species of reptiles and freshwater fish, and more than 10,000 species of plants (including more than 4,000 endemics), this area is of huge importance for wildlife.

Farmers clear the forest and savannah directly for large-scale soybean cultivation. This is also pushing cattle ranchers and slash-and-burn farmers ever deeper into the Amazon rainforest (Butler 2007). The global demand for soybean for food and recently for biodiesel is increasing, causing the expansion of soybean farms into the biodiverse cerrado.

Moreover, the cerrado soil and vegetation have high levels of stored carbon. If soybean biodiesel crop replaced cerrado, it is estimated that it would take 37 years to replace the carbon lost in the process (Fargione et al. 2008), making this biofuel both ineffective and potentially counterproductive for tackling climate change.

Recommended Citation:
BirdLife International (2008) Farming is destroying the Brazilian cerrado—one of the world's richest savannas. Downloaded from http://www.birdlife.org on 07/07/2022