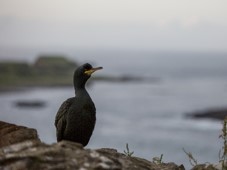 Modelled probability of extinction of European Shag colonies in relation to weather that is more extreme than the current average.

Increased variability and unpredictability in weather patterns are forecast to increase with climate change, resulting in more extreme weather events (Solomon et al. 2007). Whilst most climate change studies focus on the changes in mean temperature values over long periods of time, the impacts of stochastic events are likely to also have large population impacts.

Extreme weather events are characterised by being rare but of large magnitude. They are thought to particularly impact seabirds, through changes in frequency and severity of rainfall, onshore wind and snow storms. In Punta Tombo (Argentina), the number of storms per breeding season increased between 1983 and 2010, and in two years, high levels of precipitation killed 50% and 43% of Magellanic Penguin Spheniscus magellanicus chicks. The effects of extreme weather events were additive to starvation and predation, and the probability of survival decreased with increasing amounts of rain (Boersma and Rebstock 2014).

Similarly for Antarctic Petrels Thalassoica antarctica, the frequency of extreme weather events has large impacts on the breeding success of birds in the Svarthamaren colony, with the number of snow storms per breeding season negatively impacting annual productivity. Simulations suggest these snow storms have the potential to negatively influence long-term population dynamics (Descamps et al. 2015).

Nesting success of Bank Cormorants Phalacrocorax neglectus on Robben Island, South Africa was found to be influenced by the height of storm waves (Sherley et al. 2012), as the species nest on rocky outcrops, islands or man-made structures close to the high water mark. Storms that coincided with peak breeding season resulted in up to 71% nest failure.

In East Scotland, the effect of stochastic weather events was determined for the population growth and extinction probability for European shags Phalacrocorax aristotelis inhabiting the Isle of May (Frederiksen et al. 2008). Using 43 years of ring recovery data, variability in juvenile and adult survival was determined in response to winter weather conditions.

The inclusion of extreme weather events in population models significantly increased extinction risk, with survival of second year and adult birds being largely reduced in years of high rainfall and strong onshore wind in late Winter. These extreme events often resulted in mass mortality ‘wrecks’. Strong wind is likely to influence survival due to the increased energy requirements needed for foraging in turbid conditions and rainfall through increased risk of hypothermia due to the shags plumage, which isn’t completely waterproof.