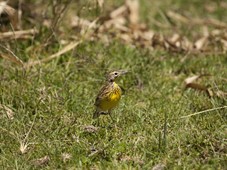 Among Africa’s most critically threatened habitats are Kenya’s unique montane grasslands, which include the Kinangop Grasslands, an area of 77,000 hectares on the Kinangop Plateau, north of Nairobi. Among other threatened and restricted-range bird species, these grasslands are the global stronghold of the Endangered Sharpe’s Longclaw Macronyx sharpei.

Most of the Kinangop Grasslands are in the hands of private landowners. Until recently, local people had little appreciation of their conservation importance, and dug them up for crop cultivation. After a decade spent trying to arrest the degradation of the grasslands, BirdLife and its national Partner, Nature Kenya, concluded that the only solution was to purchase and manage a substantial area for conservation.

In 2004, Nature Kenya purchased 20 hectares of grassland with funding from the Aage V. Jensen Charity Foundation. The Kinangop Grasslands Nature Reserve is managed by the Friends of Kinangop Plateau, a community organisation which has become one of the most dynamic and successful of BirdLife’s global network of Local Conservation Groups.

Monitoring by trained local people showed that populations of Sharpe’s Longclaw and other restricted-range species were increasing within the reserve. But outside the reserve, the rate of conversion of private land from grassland to wheat and potato fields showed no sign of decline.

So in February 2006, Nature Kenya received further funding from the AVJCF to promote community management of the Kinangop reserve, and to encourage other farmers and landowners to retain their grasslands, by demonstrating the economic benefits of sustainable livestock management and ecotourism.

One result is that sheep, which graze selectively (leaving the tussocks that Sharpe’s Longclaws use for breeding), are returning to the grasslands. Nature Kenya and the Friends of Kinangop Plateau have established a workshop which buys the wool and manufactures goods such as carpets, which are sold for good prices to local people and tourists, and supplied to shops in Nairobi. The low price paid for raw wool on the open market was a major factor in turning farmers towards crop cultivation. Local women and young people have been trained in techniques such as wool carding, spinning and weaving.

The reserve now offers a campsite for eco-tourists, and an “eco-resource centre”, which provides education in livelihoods and environmental awareness for local adults and children, and visitors from elsewhere in Kenya. Nature Kenya and the Friends of Kinangop Plateau have developed courses on the importance of grassland and biodiversity conservation, and practical demonstrations of farming techniques, including tussock restocking, sustainable grazing and organic gardening.

Nature reserves purchased and run by conservation NGOs and local communities are a new departure for Kenya and most other African countries. The Kinangop project has become a model for community-run reserves elsewhere in Kenya, and more recently, conservationists and community representatives from elsewhere in Africa have begun to visit the reserve to learn its lessons.