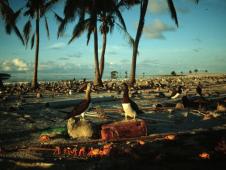 Clipperton Island (to France), located c.1,000 km south-west of Mexico, formerly held tens of thousands of nesting seabirds. Introduced pigs devastated the ecosystem, and seabird colonies declined to a few hundred individuals. Shooting all the pigs has led to a dramatic recovery, and the island now supports c.40,000 Masked Boobies and 20,000 Brown Boobies.

The history of Clipperton Island (to France), located c.1,000 km south-west of Manzanillo, Mexico, illustrates the dramatic ecosystem-wide effects of eradicating introduced mammals from a small uninhabited island. Before the introduction of feral pigs at the turn of the century, Clipperton was a small, sparsely vegetated atoll, with extremely high densities of plant-eating land crabs Gecarcinus planatus, and tens of thousands of nesting seabirds. Once introduced, the pigs ate the eggs and chicks of nesting seabirds and most of the land crabs. The diminished crab population caused a dramatic increase in plant cover. The ground-nesting seabirds were reduced to c.1,000 individuals, including no more than 150 Masked Booby Sula dactylatra and 500 Brown Booby S. leucogaster (Stager 1964).

In 1958, all 58 pigs on the island were shot by Ken Stager, an ornithologist from the Los Angeles County Museum. The effects were evident on the next visit to the island by researchers, ten years later. There was much less vegetation on the island and the number of breeding seabirds had increased to c.25,000, including more than 4,000 Masked and 15,000 Brown Boobies (Erhardt 1971). Clipperton is now almost devoid of ground cover, there are an estimated 11 million land crabs (Dodson and Fitzgerals 1980), and it once again holds one of the largest Masked and Brown Booby colonies in the world (with c.112,000 and 25,000 birds respectively: Pitman et al. 2005).

Unfortunately, rats were recently introduced to Clipperton following shipwrecks of longline shark-fishing boats in 1999 and 2001. The rats are feeding heavily on both crabs and seabirds (Pitman et al. 2005). Nevertheless, it is hoped that, like the pigs before them, they can be eradicated from the island (B. Tershy in litt. 2003).