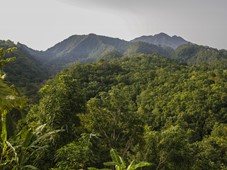 Many BirdLife projects supported by Aage V. Jensen Charity Foundation have been years in the planning, and deliver their benefits over the long term. But AVJCF support has also enabled the BirdLife Partnership to take quick and decisive action when a conservation emergency arises.

The island of São Tomé of the equatorial West Africa is home to three Critically Endangered birds: the São Tomé Fiscal Lanius newtoni, São Tomé Grosbeak Neospiza concolor, and Dwarf Olive Ibis Bostrychia bocagei. In 2006 BirdLife appointed a local NGO, the Associação de Biólogos Saotomenses (ABS), the 'Guardian' for these species. In the same year, the Obô Natural Park was established, which together with its buffer zone covers almost all the known habitat of the three species.

Late in 2009, BirdLife became aware of proposals to recover and expand former palm oil plantations overlapping with the buffer zone, close to the Monte Carmo forests, one of the few places where all the endemic birds occur.

With AVJCF funding, staff from the BirdLife Partnership visited São Tomé, and joined ABS in meetings with key government officials, palm oil investors and local community members. A commitment has now been secured from the palm oil company not to encroach further into the Monte Carmo forests.

Following outreach work by ABS, hunters in the area now recognise the threatened birds and the rationale for not hunting them. The first law regulating hunting is in process, providing explicit protection for the Critically Endangered species.

Fieldwork is underway to improve our understanding of the three Critically Endangered bird species. BirdLife is coordinating an international action plan for these species, and an international advocacy plan, which will guide activity beyond the life of this project to safeguard Obô Natural Park from encroachment by palm oil plantations.