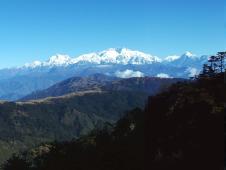 Biodiversity conservation is often more effective, with greater legitimacy and sustainability, when it engenders the support of civil society. It is particularly important to engage those communities who most immediately depend on the services that nature provides. This is especially relevant in Nepal where many forests are directly managed by local people through Community Forest User Groups (CFUGs).

The Kanchenjungha Conservation Area and nearby Mai Valley forests are Important Bird and Biodiversity Areas (IBAs) in eastern Nepal. They support a rich flora and fauna characteristic of the eastern Himalaya. In 2007, Bird Conservation Nepal (BCN; BirdLife in Nepal) began a project to build the conservation capacity of local NGOs, CFUGs and grassroots community organisations. Through the establishment of the Nepal Bird Conservation Network (NBCN), it is hoped that local constituencies will be able to support, promote, and ultimately take responsibility for conservation activities in the region.

The two year project, funded through the Critical Ecosystem Partnership Fund (CEPF), established a network of local community conservation groups known as Site Support Groups (SSGs). In total, eight NGOs were taken as SSGs across the two IBAs. These groups, along with the regional CFUGs, received training in a range of activities including participatory biodiversity monitoring, habitat management, report and proposal writing and fundraising. With assistance from the Royal Society for the Protection of Birds (RSPB; BirdLife in the UK), a monitoring programme was developed using birds as indicators of environmental health and extensive surveys of birds and forest quality were carried out.

The project has succeeded in building the capacity of local forest-user groups to deliver biodiversity conservation. For instance, several of the identified SSGs have already secured micro-grants for further grassroots conservation action.