Developing a market-based solution to the bird trade in Indonesia 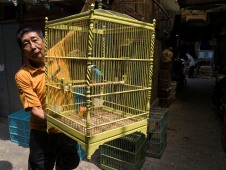 Bird-keeping is a hugely popular pastime in Indonesia. Unfortunately, demand for native songbirds is driving the expiration of wild population throughout the region. In response, a collaborative initiative—led by Oxford University and Burung Indonesia (BirdLife in Indonesia)—is developing a non-State, market-based solution. Through engagement with the songbird-keeping fraternity and the establishment of a certification system for captive-bred birds, it is hoped that Indonesian consumers can be guided away from keeping wild-caught birds.

Bird-keeping is an immensely popular pastime throughout Indonesia—especially on the islands of Java and Bali. Research in the region’s six principal cities found that 35.7% of households kept a bird and that 57.6% had done so in the last 10 years. The data suggests that a projected 584,000 households within these cities keep almost two million songbirds, of which over half are wild-caught (Jepson and Ladle 2009).

Central to the Indonesian passion for songbirds is the aesthetic appreciation of song. Kicau-mania, a hobby in which enthusiasts enter their prize birds in song contests, is widespread in Java and Bali and is starting to gain popularity in Kalimantan and Sumatra as well. The rise in popularity of song contests, combined with a recent import ban on Chinese songbirds due to avian influenza fears, has resulted in an increase in demand for native species with exceptional voices (Jepson and Ladle 2005, 2009). Of these, Orange-headed Thrush Zoothera citrina is regarded as the most accomplished songster (Jepson 2008). This species, along with other native birds used in song contests—Long-tailed Shrike Lanius schach, White-rumped Shama Copsychus malabaricus, and Oriental Magpie-robin Copsychus saularis—are now among the ten commonest species kept in captivity (see figure) (Jepson and Ladle 2009).

There is growing anecdotal evidence to suggest that this rise in demand has had a significant negative impact on wild populations. Local reports suggest that Orange-headed and Chestnut-capped Zoothera interpres thrushes have been systematically ‘caught out’ from forest blocks throughout Java and that ‘rolling’ local extinctions of White-rumped Shama have occurred across West Indonesia in the wake of illegal logging (Jepson and Ladle 2009). There are fears that these species could ultimately suffer a similar fate to Straw-headed Bulbul Pycnonotus zeylanicus, which is now virtually extinct in Indonesia due to high demand from the wild-bird trade (BirdLife International 2001).

Clearly, the popularity of bird-keeping, and of song contests, is taking an unsustainable toll on wild bird populations. However, traditional mechanisms to regulate wildlife trade, such as those applied to international trade through CITES, may not be the most appropriate for the Indonesian domestic arena (Jepson and Ladle 2005, 2009). The ubiquity and cultural importance of bird-keeping, combined with its economic importance in the region, may render outright trade bans impractical and undesirable. For example, bird-keeping is estimated to contribute at least €85 million to the economies of Java and Bali’s six largest cities (Jepson and Ladle 2005). In addition, the dynamic nature of the Indonesian bird market suggests that a ban on trade in one species, for example the Orange-headed Thrush, could simply lead to increased interest in other taxa such as leafbirds Chloropsis (Jepson and Ladle 2009).

There is a growing recognition that a market-based solution may be preferable to State regulation and enforcement. Researchers from Oxford University have found that the songbird fraternity is receptive to such an initiative and they are currently working with Burung Indonesia (BirdLife in Indonesia) and the bird-keeping community to establish captive-bred alternatives to wild-caught birds. It is hoped that the most popular native songbirds can be supplied from certified breeding facilities that guarantee high welfare and quality standards. By promoting this certification scheme, it is hoped that consumers can be encouraged to seek out captive-bred ‘ring class’ birds. The proposal has engendered considerable support from a broad constituency of groups associated with bird-keeping, and the pastimes governing body Pelestari Burung Indonesia (PBI) has already announced that wild-caught songbirds will be prohibited from its accredited songbird contests after 2012.

Recommended Citation:
BirdLife International (2010) Developing a market-based solution to the bird trade in Indonesia. Downloaded from http://www.birdlife.org on 19/01/2022