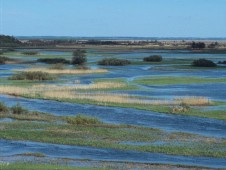 There has been an increase in the total land area of Important Bird Areas (IBAs) designated as Special Protection Areas (SPAs) in the European Union, from 23% to 67% (47 million hectares) in the period 1993–2013. However, one third of the total area of IBAs remains undesignated, and many important marine areas still need to be identified and protected.

The Birds Directive (‘Council Directive on the conservation of wild birds’), adopted in 1979, is an international legal instrument for bird conservation that applies to all Member States of the European Union (EU). Among other measures, it requires the creation and proper management of a coherent network of Special Protection Areas (SPAs) for almost 200 bird species, subspecies or populations that are considered the most threatened in Europe, as well as for all other migratory bird species and for all wetlands of international importance (Ramsar Sites). Along with Special Areas of Conservation (SACs) designated under the Habitats Directive, SPAs form the Natura 2000 network of protected areas.

The means by which BirdLife identifies Important Bird and Biodiversity Areas (IBAs) in the EU is directly relevant in this context, as the selection criteria for IBAs were deliberately aligned with SPA selection criteria (Grimmett and Jones 1989, Heath and Evans 2000). Consequently, the value of BirdLife’s IBA inventory as a ‘shadow list’ of SPAs has repeatedly been recognised by the European Court of Justice and the European Commission in a series of cases brought against Member States for failure to designate sufficient SPAs.

This has helped to bring about a dramatic increase in the total area of IBAs designated as SPAs, from 23% in 1993 to 67% (47 million hectares) in 2013. This increase is even more impressive when one considers that the total number of IBAs has doubled over the same period, reflecting the ongoing expansion of the EU and the growing number of Member States obliged to protect key sites for birds. However, one third of the total land area of IBAs in the EU remains undesignated, and much remains to be done to identify and protect important marine areas.