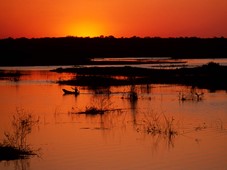 Most conservation efforts in Madagascar have focused on its forests, yet nine of Madagascar's 13 Endangered and Critically Endangered birds are found in wetlands. BirdLife partners are working to protect two wetland complexes in Madagascar for the benefit of both nature and people.

Wetlands are biodiverse (Junk et al. 2006), and provide large benefits to people through ecosystem service provision (de Groot et al. 2012). In Madagascar, the wellbeing of the Malagasy people is heavily reliant on wetlands. In recent years however, overfishing, unsustainable hunting and the expansion and intensification of rice growing have depleted the rich and unique biodiversity on which the resilience and productivity of these wetland ecosystems ultimately depend.

With the help of Aage V. Jensen Charity Foundation, BirdLife is leading efforts to create two large protected areas in two wetland complexes: Mahavavy-Kinkony in north-western Madagascar, and Mangoky-Ihotry in the south-west. Despite unanticipated difficulties resulting from the political upheaval of these years, both sites have now been granted temporary protection, an important step on the way to permanent protected area status.

The AVJCF support has also helped a young Malagasy NGO, Asity Madagascar, to grow into an effective national nature conservation organisation, and to become the BirdLife Partner Designate for Madagascar, taking over the responsibilities of BirdLife's Madagascar country programme.

Working together, the Malagasy staffed BirdLife Programme and Asity Madagascar evolved an approach to wetlands conservation that received the full consent and participation of the people who live there. With BirdLife's help, local people have established community-based organisations which were able to sign contracts with the government to manage the wetland natural resources for themselves. Under Malagasy law, these contracts are available to organisations, but no private individuals.

Management plans have been developed and are beginning to be put into practice, with activities including mangrove restoration and invasive plant removal, to enable native vegetation to recover. Project activities have resulted in almost immediate improvements in the status of the biodiversity, shown particularly by monitoring of the birds. At Mahavavy-Kinkovy, the Critically Endangered Madagascar Fish-eagle Haliaeetus vociferoides increased from two pairs in 2006 to four pairs in 2010. Peak counts of the Endangered Madagascar Sacred Ibis Threskiornis bernieri increased from 42 in 2005 to 211 in 2010. At Mangoky-Ihotry, a world record count of 281 individuals of the Vulnerable Madagascar Plover Charadrius thoracicus was made in 2009, and 31 Endangered Madagascar Teal Anas bernieri were recorded in 2010, where only ten birds had been seen up to 2005.

The project was always intended to provide a model which could be used elsewhere in Madagascar and Asity Madagascar has replicated this approach successfully at Tsitongambarika Forest in south-east Madagascar, helping to conserve over 60,000 hectares of forest.