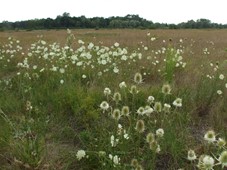 One of the three Jensen Foundations, the Aage V. Jensen Nature Foudnation, makes a huge contribution to BirdLife Partner DOF's conservation work in Denmark. Funding for the work of the wider BirdLife Partnership comes from the Aage V. Jensen Charity Foundation (AVJCF), which supports nature conservation outside Denmark. The majority of its grants are made outside Europe, but on occasions AVJCF has supported European projects. The Ostrovik Meadow was such a case.

In 2004, ten new countries joined the European Union, bringing with them a wealth of wildlife-rich habitats. Among sites of high biodiversity value at risk from the implementation of the CAP in the new member countries was the Senne Important Bird Area, the most important site for birds in Slovakia. The wet meadows, fishponds and wetlands attract thousands of breeding, migrating and wintering birds. But in the years leading up to Slovakia’s accession to the EU, farming practices had already begun to change. Traditional ways of managing the land based on cycles of flooding had been abandoned, and interference with the natural hydrological processes led to the degradation of meadow and wetland habitats.

The national Partner, SOS/BirdLife Slovakia, was at work at the Ostrovik Meadow, an important part of the Senne IBA, installing sluices to allow flooding, and working with a cooperative farm to restore bird-friendly mowing and grazing regimes. Unfortunately the farm went bankrupt, and the meadows were once again at risk.

Given the extreme urgency of the situation, the Aage V. Jensen Charity Foundation provided SOS/BirdLife Slovakia with the funds to purchase and manage 30 hectares of the meadows. Over the following years, further AVJCF grants enabled SOS/BirdLife Slovakia to acquire in total more than 80 hectares of wet meadows and wetlands, and fill in some important gaps between plots already purchased.

SOS/BirdLife has worked to restore the meadows, enhancing breeding and feeding areas for birds. Numbers of breeding and visiting birds have increased, with confirmed or suspected breeding of several species of global or European conservation concern, including the Near Threatened Ferruginous Duck Aythya nyroca. Flocks of up to 3,000 Ruff Philomachus pugnax have been seen on Ostrovik Meadow in late March and early April.

Awareness raising has been important, with regular guided school visits, summer camps and plans to build a Visitor Centre and Eco-farm near Ostrovik Meadow. Participants in summer camps have helped with habitat monitoring and restoration, the creation of an educational trail, and bird monitoring.

Support from the Aage V. Jensen Charity Foundation helped in obtaining a LIFE Nature grant for the restoration and management of the Ostrovik Meadow from the European Commission. With the future of most of the meadows secured, SOS/BirdLife is seeking backers to buy the remainder of the 120 hectare site.