Conserving the jewels in the crown of the High Andes 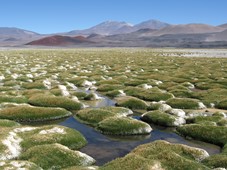 The wetlands of the High Andes play a vital role in providing water to human communities and ecosystems at lower elevations, and are home to a range of threatened bird species. These wetlands however face a myriad of threats, and so BirdLife partners are working alongside other NGOs, local authorities and communities to ensure the conservation and sustainable development of the wetlands.

Wetlands are biodiverse ecosystems (Junk et al. 2006), that provide large benefits to people through ecosystem service provision (de Groot et al. 2012). The wetlands of the High Andes are home to a significant number of highly threatened bird species such as the Junin and Hooded Grebes Podiceps taczanowskii and P. gallardoi and Andean Flamingo Phoenicoparrus andinus. These wetlands are however threatened by mining, drainage, hydroelectric dams, introduced species and overexploitation of biological resources. Tropical Andes ecosystems are also at risk from climate change, with changing temperatures and rainfall patterns likely to influence habitats and the ecosystem services they supply (Urrutia and Vuille 2009).

In 2011, with the support of the Aage V. Jensen Charity Foundation, BirdLife initiated a project to ensure the long-term conservation and sustainable development of these wetlands. The target sites were the Buenos Aires Plateau (Argentina), the Llanganates National Park (Ecuador), and Lago Junin (Peru). Key to the success of the project and its long-term sustainability have been the close relationships established with local authorities and communities, who were fully involved in planning and implementing project activities from the beginning.

Significant achievements of the project included the declaration of a 52,000 hectares National Park on the Buenos Aires Plateau, which included the most important breeding site for Hooked Grebe. Improved communication with national Ramsar focal points resulted in a proposed extension to the Llanganati wetland complex. The site was included on the official list of the priority wetlands in Ecuador, and will receive more resources for its protection. Project activities also generated proposals for six locally protected areas within the Llanganati complex, covering 870 hectares of wetlands and forest.

A major challenge to the conservation of Lago Junin is the diverse array of stakeholders dependent on natural resources of the lake and surrounding area. The project helped reactivate the local management committee, which consist of relevant government and private institutions. As a direct result of project activity, the management committee has been equipped with the tools and skills to fulfil its role as the local environmental authority, and has drafted an emergency response plan for the lake's threatened biodiversity, with a particular focus on Junin Grebe and Junin Rail Laterallus tuerosi. The project also succeeded in building local conservation capacity. Local Conservation Groups and National Park rangers are monitoring all three sites after training by the project.

Thanks to the participatory ecosystem services evaluations implemented at all three sites, their value has been recognised by the local communities and by local and regional government and environmental authorities. The BirdLife Partner in Chile is already applying the lessons learned and recommendations shared by project partners, to help guide its future activities in Chile's High Andean wetlands. Other project partners plan to replicate the project's approach at other high priority wetland sites in the High Andes region.

Recommended Citation:
BirdLife International (2015) Conserving the jewels in the crown of the High Andes. Downloaded from http://www.birdlife.org on 28/11/2022